Mompati Thuma’s decision to retire from international football will surely leave a void in the side; his robust and tough tackling displays have highlighted his importance to the national side for the past nine years. The BDF XI defender is revered for his leadership skills as well as his exemplary off field behavior which made him stand out from his peers to be selected the national team captain.

Stanley Tshosane told this publication that the new captain will be revealed before the Independence Day friendly against Burkina Faso. “We are fortunate to have a squad full of leaders. Our side has always been blessed with individuals who are natural leaders. We will continue to discuss the matter within the technical team and reveal the new captain before the Burkina Faso game,” he stated.

The coach added that they already have a player’s committee which consists of five senior players. He revealed that the committee’s major role is to bridge any possible gaps between the playing staff and the technical team, as they also act as advisors to youngsters who are gradually introduced to the team. Tshosane indicated that a new captain will be selected from the five player roster.

Following the experienced defender’s imminent retirement, Gazette Sport has taken a closer look at the credentials of five senior players who are being touted as the possible captains for the national team.

The right-back has been one of the most consistent players at club level in the past two seasons, also cementing his place as a regular starter in Tshosane’s side. Motlhabankwe is a versatile player who has now played in three different positions to prove his worth to the side. He got his first cap in 2004 as central midfielder and currently plays as a right-back but slotted into the left-back position in the second half of this weekend’s 3-1 defeat against Uganda.

Gabonamong has been capped 65 times for the national team, thus making him one of the most experienced players in the team. He has been given the armband at club level on numerous occasions and led by example by leading his side to the Nedbank Cup final last season. His all action displays have made him one of Southern Africa’s best defensive midfielders and he has been an asset to the national team whenever he was on the pitch.

At 28 years old, the CS Don Bosco striker is arguably at the peak of his powers. He has eclipsed Dipsy Selolwane as the all time leading goal scorer in the national team’s history. The powerful striker has been entrusted to spearhead the team’s strike-force on a regular basis and looks set to continue in his role. He is arguably one of the side’s influential figures as Botswana’s first ever CAF Player of the Year nominee.

Not renowned for his vocal leadership skills but well known for his inspirational performances on the pitch, Mogorosi is one of the country’s best exports to the South African league. Having won a cup in his debut season, the winger’s hunger for success would surely be an inspiration to youngsters who aspire to reach his level of achievements.

Maposa is already a captain at club level. His leadership skills earned him the Gaborone United armband last season and he is Kabelo Dambe’s main competition for the first choice spot between the posts. He gained experience from being the substitute of Zebras’ former goalkeeper Modiri Marumo and can pass on his learning experience to a younger generation of goalkeepers coming through the ranks.

First choice goalkeeper Kabelo Dambe and midfielder Ofentse Nato have an outside chance of earning the captaincy since they are likely to be involved in the national setup for the next decade or so. The players act as a bridge between the veterans and the new players, and  the roles will surely suit their captaincy credentials. 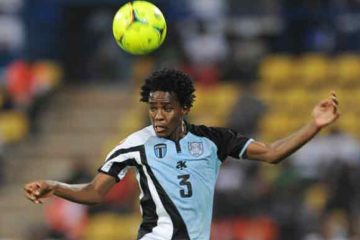