With three defeats in as many games, the Zebras are in danger of becoming an irrelevance in Group G of the 2015 Africa Cup of Nations Qualifiers. Peter Butler’s side has the joint worst record in the current qualifiers, a record they share with Group B minnows Ethiopia.
Zebras and Ethiopia are the only teams without a point in the qualifying phase so far. Botswana has scored only once and conceded six goals in the first three matches. Last Friday’s defeat has all but dashed Botswana’s hopes of qualifying for next year’s continental competition.

Zebras’ hope for qualification is a scenario whereby one of if not both the top two teams fail to get maximum points in the remaining games while Botswana wins the last three matches. Butler’s side can also target a strong finish in the last three games to stand a chance to qualify as one of the best third placed teams in the AFCON Qualifiers. They have difficult fixtures remaining with games away to Senegal and Egypt and a home game against Tunisia.

In a post match press conference Butler stated that he still has hope of earning positive results in the remaining fixtures, the coach stated the following, “Qualifying for the tournament was not our main target. We are building a team capable of competing with the best countries on the continent. We want to use the qualifiers to give our players experience of handling high pressure games.”
The term ‘rebuilding’ has been used a lot since Butler’s arrival earlier this year. However, Botswana’s Group G opponents could also stake a claim of going through rebuilding phases as well. Arguably, Group G consists of teams going through transitional periods, all teams are of equal status given their struggles to pose a threat at continental level in the past two years.

Senegal, Tunisia and Egypt are shadows of the sides they once were and they have taken a back seat to Africa’s superpowers such as Ivory Coast, Mali, Ghana, Algeria and Nigeria. Senegal is a former AFCON finalist, Tunisia is a former AFCON winner and Egypt is a 7 time AFCON winner while Botswana boasts some of African football’s biggest ‘giant killing’ sprees with wins over Tunisia and Togo years ago.

None of the teams in Group G boasts an array of talent that could separate themselves from the rest, Egypt has a superstar in Mohamed Salah but the forward is a bench warmer at club level and he has struggled to impose himself at the highest level of world football, the English Premier League.
Football analyst Jimmy George believes that the team will improve as soon as it grasps the finer details of Butler’s philosophy. “Let us give them the benefit of the doubt. The team will improve when they start to understand his tactics. We should not forget that we were missing players such as Mogogi Gabonamong, Ofentse Nato and Galabgwe Moyana. There are a lot of positives to gain from this experience, AFCON 2017 is a realistic target,” said George.

Who takes the blame?
Pundits have argued that the players should take a large chunk of the blame for the team’s performances. However, the Botswana Football Association could also be liable for a share of criticism for the following reasons.

Failure to set up friendly matches during numerous FIFA international calendar dates last year resulted in lower FIFA and CAF rankings. The latter rankings proved more vital as Botswana missed out on favourable draws for the AFCON Qualifiers. This robbed the foreign and locally based players of the chance to meet on international dates and form cohesive partnerships on the field.
The top 21 ranked nations were seeded and a majority of the sides have been placed in groups that are perceived as ‘open groups’. Examples include Gabon and Cape Verde who are both in groups that consist of sides that are of equal stature, both sides have taken advantage of the favourable draws they were awarded by claiming top spots in their respective groups.

Botswana was ranked 25th by the time the draw occurred, this meant that the nation had to go through the tough task of four preliminary fixtures before heading to the group stages of the AFCON Qualifiers. Fatigue could also be one of the reasons why the team is struggling.

Problems in the attacking department?
Butler is the first to admit that his striking department is yet to gel. The fact that the team has scored only once in three outings suggests that the attacking department is yet to achieve match sharpness. Botswana had a single shot on goal in the 2-0 defeat against Egypt last Friday from Segolame Boy’s curved corner kick that almost crept in at the Egyptian goalkeeper’s near post.
Zebras’ record scorer Jerome Ramatlhakwana had a workaholic performance that showed his improvement in terms of his movement and his ability to help his team when they lose the ball. His lack of match fitness was evident despite his impressive display, the nation could panic if he were to get a suspension or an injury because he has no capable understudy.
Tebogo Sembowa, who was at times Ramatlhakwana’s understudy, is also not match fit as he is suspended for disciplinary reasons at club level. Sembowa has a decent record of three goals in 11 appearances at national level.

Other strikers such as Bonolo Fraizer and Kekaetswe Moloi have not been able to convince Butler of their abilities to lead the line for Zebras. The scoring chart in the beMobile Premier League suggests that foreign players have better scoring records than local strikers, further proving that local strikers are struggling to find the net on a consistent level this season. Only one Motswana, Police XI’s Uyapo Seleka, is in the top five of the league highest scoring players so far. 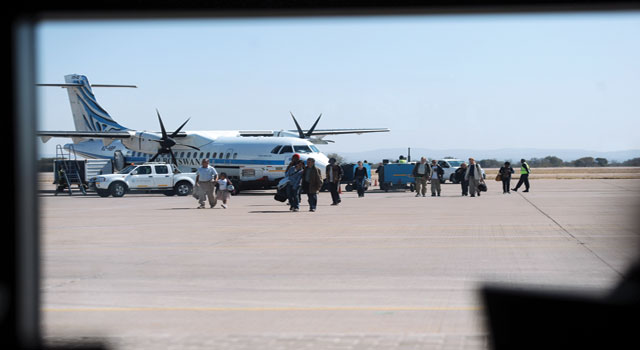