Time Out stumbled on Ndiye Chengeta’s artwork titled The Ten Grievances of a Motswana at the ongoing Thapong Members Exhibition. It depicts 10 digital print mediums combined to form one piece that seeks to speak out against social and economic grievances experienced by Batswana.
Ndiye said he decided on the title of his artwork “because as a Motswana I have noticed a growing culture of fear to speak out against social and economic grievances we experience as a people in Botswana. The false perception of individuality has created a global atmosphere that has bred human injustices on all levels of society and Botswana is no exception,” said the 26-year-old student who is currently pursuing a Bachelors (Hons) in Professional Design at Limkokwing university.
Explaining the concept behind the artwork, Chengeta says his artworks addresses nepotism, media propaganda, colonialism, load-shedding, autocracy, drone monitoring, drug trafficking, tertiary youth grants, Chinese construction tender, and the appropriation for land from the indigenous people of our land.
“I have no fear in my heart pursuing this initiative because my life has now become a vessel to voice the grievances of the silent majority. I even had a difficult time attempting to put a price tag to such an art piece, so I priced it at the same price it took me to create it, so I can just develop the next series called, The Democracy of Self,” Chengeta said adding that his current artworks were inspired by the mentorship of Jiddu Krishnamuti and the participation of his father’s past political aspirations.
He further added that as people we should learn to ask ourselves questions like: Why do Batswana pay the same amount of money as tourists to see wildlife in their own motherland? Should our children without discount see the beauty of their inherent land on foreign television stations?
“This is but a tip of the iceberg- of questions that I will transform into works of art to mobilize and recruit the conscious. One must note that creativity is free of politics when the mind behind the creation understands the longevity of an idea,” he concluded.

DCEC May Be Asked To Probe Covid-19 Corruption 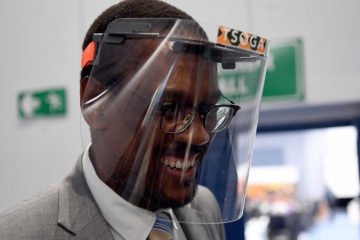