According to a cycling expert, Batswana are interested in cycling and fitness. However, the biggest hurdle to developing a cycling culture could be lack of a proper infrastructure of good bicycle lanes, showers at workplaces and bike stations. Staff Writer GOSEGO MOTSUMI reports

Most people in Botswana are not particularly enthusiastic about non-motorised transport. However, this may change because the long queues at filling stations occasioned by an unprecedented fuel shortage that has hit Botswana is proving a difficult for most motorists to adapt to and a people not used to waiting long in line three weeks since the hustle began.

But in response, President Mokgweetsi Masisi has appealed to Batswana to become fuel-conservative and ordered a fuel rationing that could spawn illicit hoarding and a black market worse than the ‘bootlegging’ that emerged soon after alcohol was prohibited as a measure to curb the spread of COVID-19 recently.

In a televised address last week, President Masisi appealed to Batswana “to trace our steps back to use bicycles and taking walks to ease the pressure on the fuel shortage”. This was met with a spirited debate around whether Batswana were ready to resort to cycling. This is in contrast to many cities around the world where bicycles are widely used for urban commutes, thanks to their practicality and functionality.

And in a world of rising carbon emissions and fluctuating fuel supply and pump prices, bike-friendly cities have become more important than ever. Denmark’s capital, Copenhagen, is widely regarded as the world’s most cycling city. According to the Copenhagenize Index, the city was hailed as the number one bike-friendly city on the planet in 2019. Numbers showed that 62% of locals commute by bicycle and collectively cycle 894,000 miles each day.

By comparison, earlier this year the BBC published an article that named Gaborone as the city where cyclists are unwelcome, noting that a social stigma around cycling has made the streets more dangerous than lions. The article observed that the hostile attitude of local drivers towards cyclists emanates from a deep-seated belief that cycling is for the poor. “In modern Botswana, drivers have enjoyed the respect that comes with owning a car as opposed to a bicycle, which is now considered archaic,” the BBC said.

In an interview with cycling enthusiast Kagiso Matsila, who is the Director of Chain Reaction, Batswana are actually interested in cycling and fitness, with people commuting from nearby villages to the capital city where unfortunately they have always faced challenges of improper road infrastructure that does not cater for cyclists at all. Matsila must know what he is talking about because he has been running a bicycle renting business for the past 13 years.
For him, the answer to the fuel crisis lies in cycling as an affordable, fast, healthy, and emissions-free mode of transport.

Cycling is also a safe way to avoid crowded public transportation systems that the World Health Organisation regards dimly in the fight against COVID-19. “We could start with organisations encouraging people to cycle on Fridays but we need roads that cater for cyclists as well as ablutions that cyclists can use to freshen up,” says Matsila. “If you go to Cape Town (South Africa), you will see how the roads are structured to cater for non-motorised transport. That is what we need to encourage and make it easy for the culture of cycling to grow in Gaborone.”

Forty-two-year old Matsila has been cycling for charity for the past 15 years riding from Gaborone to Maun and other parts of the country. He says no distance is too far for a mountain or an off-road bicycle, which are more durable and come in different models to cater for different preferences and prices. Cycling is his lifestyle as he often rides to his corporate job in Gaborone or running home errands.

“A system that our city planners can use is to erect bike stations around the city where bicycles can be left safely while we carry out our errands,” Matsila notes. “For convenience, we could have the option of leaving a bicycle that was borrowed from a bicycle station at Commerce Park at a bicycle station at Riverwalk if you want to use other modes of transport.”

In an opinion piece published in The Botswana Gazette in February this year, the Managing Director of Molapo Crossing, Luc Vandercasteele, observed that Gaborone ensures that cyclists are “secondary citizens” compared to motorists who pollute the city. Titled “Why is Gaborone hostile to cycling?,” Vandercasteele’s article asserted: “Cyclists are exercising their bodies. Cyclists are using a fraction of the space the cars use. Cyclists go faster during peak hours. Cyclists save on fuel and limit carbon emissions to zero. But we like to show off, right? We like to keep up with the neighbours. We feel important driving around in our latest car. We do not care losing every day hours in traffic jams, for that is where we are seen to be affluent!” 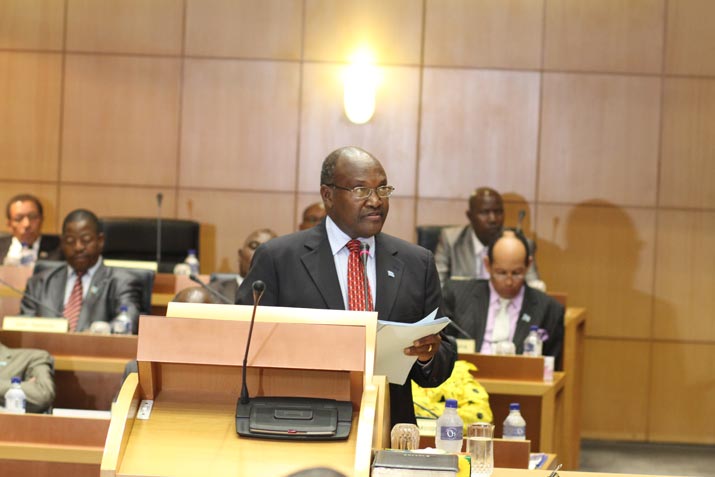