Desert & Delta Safaris, a 100% owned Botswana company is shortlisted in the People Award category in this year’s esteemed Tourism for Tomorrow Awards hosted by the World Travel and Tourism Council.
The announcement was made at the World Travel and Tourism Council (WTTC) headquarters in London. The winners of the awards will be announced during a ceremony at the 17th WTTC Global Summit in Bangkok, Thailand on April 26 and 27.
“The award ceremony recognises outstanding achievements by tourism organisations. Applicants compete for awards in five categories namely Community, Destination, Environment, Innovation and People,” said Minister of Environment, Wildlife and Tourism Tshekedi Khama who further added that a total of 15 finalists for the awards were chosen after a rigorous judging process narrowing down entries from 70 countries.
Desert & Delta has been nominated under the People Category alongside The J. Willard and Alice S. Marriot Foundation’s China Hospitality Education Initiative and Streets International, Hon An, Vietnam. The People Award category was open to any organisation dedicated to improving career opportunities for people within travel and tourism.
“Organisations need to have worked exceptionally to enhance the capacity of individuals and groups of people to enter the travel and tourism sector; to aid the recruitment and retention of underrepresented groups; to develop skills for those already employed, enabling them to advance in the industry and to offer fair employment practices,” Tshekedi said.
For his part, Director at Desert & Delta Safaris, Rodney Gerrard said their company firmly believes its people are the core of their business and play a pivotal role in the business ongoing success.  He says in early 2000 they created a citizen management training program  which aimed to further the skills of local citizens. “At the start of the program, we set out to become 100% citizen managed in our camps by the end of 2014. Due to the success of the program and those enrolled in it, we achieved this goal in 2013,” he said.
Botswana Tourism Organization finalist in the Destination Category
The Minister of Tourism, Tshekedi Khama also announced that Botswana Tourism Organization (BTO) is one of the three finalists for the 2017 Tourism for Tomorrow Awards  in the Destination category.
The destination award is about places where tourism takes place. The award recognises destinations that have worked in any aspect of sustainability. Applicants may include city, region, state, NGO’s, business, community organisations, national regional or local authorities on behalf of the destination. City of Bydgoszcz, Northern Poland and Pallas-Yllastunturi Parks Wildlife, Finland have been nominated alongside BTO. According to Tshekedi Botswana entered the competition and won this award in 2010.
“As the minister, responsible for tourism I am pleased about these nominations, as they demonstrate continued commitment by government towards sustainable utilization of resources and improvement of the lives of the people of Botswana,” Tshekedi said. 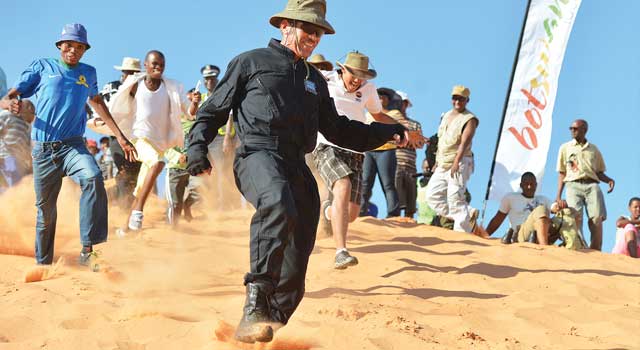