Sekuta hit maker Magdeline ‘Charma gal’ Lesolebe says she still has not received her four BOMU Awards and some prize money despite winning in four categories last year.
Speaking to Time Out last week, Lesolebe said because she has still not received the awards, she is unable to account to international promoters and event organizers who want proof that she indeed won such awards.
“We are now in 2016 and BOMU is not updating us about the awards. When I try to consult them it is a different story every day. I am approached by international promoters and event organizers who want to see the awards…and I have nothing to show,” she said.
Lesolebe, who says she has not even received money from some sponsors of her awards, added that her attempts to seek answers from BOMU were futile. “When you get to their offices you will find different faces each time and I have to present my case again. I have since been paid by Berry Heart who was sponsoring the Best female artist category and I am still waiting for payments from other sponsors,” she said.
Contacted for comment, BOMU Secretary General, Pagson Ntsie, said artists had not been given their awards because the union was “tricked” by a local they had engaged to make the awards.
“It is true artists have not received their awards. We had engaged a local business guy to engrave the awards and he brought them late on the day of the event. When we opened the boxes we found out that some of them were broken and we had to use the few that were still intact for the show to go on,” he said.
Ntsie said they engaged the local in a bid to empower local businesses since they had been using a South African company to make the awards. “Last year we decided to empower local businesses and we were disappointed. However, the matter is before the courts, and as soon as the issue is solved we will have a ceremony to present artists with their awards,” he said.
Ntsie however said all artists had been paid their award money and that no amount was outstanding. 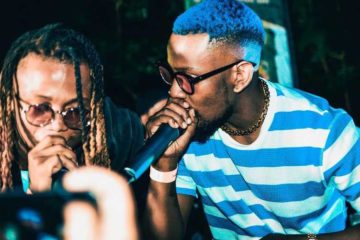