Most homes have something invaluable that could take a forbear’s grandchildren out of financial distress. KGOSI GASEBALWE SERETSE reflects on his own experience

It is that time of the year when everyone can feel the pinch from overspending during the festive season. What many don’t know is that some items under their roof are valuable and can give them a fortune if they sell them.

Most families have at least one collectable item that has been in the family for generations and such antiques and collectables are usually priceless. However, it looks like Batswana and Africans generally are poor at keeping such items safe. Items that could be regarded as antiques or collectables might include an old painting, a grandmother’s wedding gown, a wedding band, an old china tea set, ancient jewellery, a painting, old furniture, out-of-print books and general mementos from the good old days.

My family has an old Setswana Bible printed in 1890 that belonged to my grandfather who got it from a Kgosi who was also a cousin as a present. This Bible has been in the family for decades. What sets it apart from many Setswana Bibles available today is that it is one of the first-ever Setswana Bible and the language may sound like Greek to a reader today. It was bound in a heavy leather cover which was embossed in gold. The Bible is not even in the old Setswana orthography that our grandparents used. Some of the other known Bibles from that era are found at Phuthadikobo Museum in Mochudi and were for many years under the custody of fellow scribe, Sandy Grant. Just before my late grandmother passed away, I asked her if I could have the Bible and she agreed.

One day, as a young unemployed person, I took the Bible to the Director of the National Museum and Art Gallery for valuing because I foolishly wanted to sell it as I was broke. I couldn’t believe it when I was offered a huge sum of money for the Bible, which sounded like a fortune to me. The museum knew that the Bible was invaluable because of its previous owner and because it was printed in the oldest forms of Setswana, something that I wasn’t aware of. It was agreed that I would get the cheque for the Bible at a later date and I left with it. Fortunately, some family members got wind of the ill-advised potential transaction and stopped it. Just imagine what the family would have lost if someone hadn’t intervened. The Bible is still in the family and although it’s value has risen, it is not for sale. We as the family have decided to use the Bible on special occasions such as weddings and funerals.

Some people have lost some important family heirlooms because of carelessness and not being able to realise their real worth. If you look around the house, there may be something that you have inherited from your forebears and may want to have it valued by a professional to determine its worth. After determining its worth, you might want to auction it off if you need extra cash. If it’s something that the family does not want to lose, you can keep it for its sentimental value and take it out only on special occasions. I have read delightful stories of young brides who get married in their great grandmothers’ wedding gowns. Most certainly those classic wedding dresses make the bride stand out because they are not easy to copy. Others exchange wows wearing wedding rings that were inherited from an ancestor. So before you cast away that old classic family picture, that piece of jewellery, that out-of-print book, that old music record, that collection of old postage stamps or antique item of clothing, be sure to determine its real worth. There are people today who are willing to spend thousands of pula buying such rare finds that are not available from the mainstream market.

I have been reliably informed that Mary Benson’s Tshekedi Khama which is an out-of-print book, is available online for more than P25 000. So someone who owns that book can make a lot of money by selling his or her copy. I was recently given the bust of a Kgosi that is worth close to P30 000 as a gift by a popular sculptor in Botswana and I have made a decision for it to be a part of my small art collection. I hope that one day someone who inherits the statue when I am gone will see its real worth as it is invaluable. It would be heartbreaking if the sculpture is sold for a song by an irresponsible descendant.

If you read home decor magazines, you will find people enquiring about the value of some items that they have inherited from their ancestors. In most cases they get to realise that these pieces are worth more than they previously thought.

So Batswana, look around and secure something that may in future be worth a lot more than it is worth today. It might be the family heirloom that could take your children or grandchildren out of financial distress when you are no longer there to provide for them.

Entrepreneurship funds in Africa: distinguishing the good from the bad 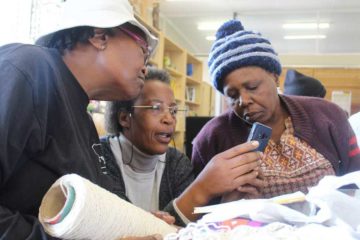