A secret document dated July 20, 2017 purportedly prepared by the Directorate of Intelligence and Security (DIS) appears to give an  insight into the reportedly soured relations between the leader of the Umbrella for Democratic Change (UDC) Duma Boko and his deputy, Ndaba Gaolathe.
In what appears to be an intrusion into the privacy of the mentioned characters, the alleged DIS Intelligence, Surveillance and Reconnaissance (ISR) Report which is referenced and titled ‘Political’, there is an alleged conversation between former Botswana Congress Party Youth League (BCPYL) President Tumiso ‘Chillyboy’ Rakgare and BCP Secretary General Kentse Rammidi.
Rammidi has publicly confirmed having a conversation with Rakgare but denied specific aspects of it. In one radio interview, Rammidi lamented the violation of his privacy and further told the Duma FM morning show that as politicians it is their kind of work to thrash out issues before they arrive at a consensus or take them to the next level.
In the report, whose authenticity is unknown, Rammidi is said to have indicated to Rakgare that UDC President Duma Boko ‘‘seems detached and disinterested in BMD as summarized by a certain Tumi on Facebook and Rakgare concurred with him’’.  Rammidi is also alleged in the report to have highlighted that during a conversation with BCP Member of Parliament Dithapelo Keorapetse, Boko is said to have indicated that he does not know how to get along with BMD leaders because ‘‘ba na le this thing ya entitlement, ba na le mathata le BCP, ba robile melao’’.
The Botswana Gazette was unable to get Boko’s comment in relation to this specific mention as his mobile was unanswered. The statement attributed to him is therefore currently unsubstantiated but partly feeds into his position regarding the respect of law.
At a press conference yesterday Boko emphasized a position to follow the legal parameters while descending on the BMD internal conflicts.
If proven true and authentic the statement in the secret report, alleged to have come from Boko cements accusations that have been doing the rounds suggesting he supports the BMD of the Pilane faction and does not want to rally behind the BMD of the Gaolathe faction.
The secret report mentions how Rammidi remarked that he thinks Gaolathe would quit politics very soon adding that, ‘‘I think he is just being pushed, this is why mathaka a ba nna ba tshwara press conferences a seyo, ba nna ba bua ka ene.’’ Rammidi is reported to have mentioned that he does not see Gaolathe joining the BDP as he would rather focus on his businesses.
For his part, DIS Director General Isaac Kgosi has rubbished the report and absolved his organisation from it. ‘‘At DISS we have no interest in what Batswana discuss about politics in their privacy. People must stop recording their private conversations and then claim DISS is behind it. We have far more serious issues of national interest to deal with’’, Kgosi said in an interview on Monday.
Pull out quote: ‘‘Boko is said to have indicated that he does not know how to get along with BMD leaders because ‘‘ba nale this thing ya entitlement, ba nale mathata le BCP, ba robile melao’’ 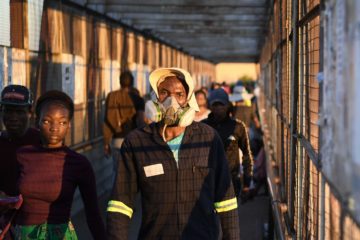