Given the depressed state owned enterprises; the Botswana Meat commission (BMC) and the National Development Bank (NDB), Government has had to take immediate decisions to reform the two, revealed Finance Minister Dr. Thapelo Matsheka, when presenting his maiden budget speech at parliament on Moday this week.

He said BMC, which buys from cattle farmers, is technically insolvent, despite government’s recent capital injections of close to a P1 billion. “In order to address these challenges, government has taken a decision to engage a management company to take over the running of the BMC with effect from April 2020,” he said, adding that the measure is intended to protect the interest of all stakeholders.

Dr. Matsheka further said government is converting BMC into a company under the Companies Act, following the approval of the BMC Transition Bill by Parliament in August 2019 and the subsequent repeal of the BMC Act.

“The repeal of the BMC Act eliminates BMC’s monopoly on the export of beef and cattle. It also entails the establishment of a meat regulator, which is at an advanced stage, to ensure transparent and fair trade in the industry and create an opportunity for more efficient and capable players contributing meaningfully to the sector,” he noted.

The other parastatal that requires immediate attention as according to the Finance Minister is the NDB. He said in response to the persistent underperformance by the NDB, his Ministry engaged the African Development Bank (AfDB) in 2018 to undertake a diagnostic analysis of the challenges besetting the Bank.

“A report has since been submitted by the AfDB, which contains specific recommendations on turning around the performance of NDB. Government has since tasked the NDB Board with the responsibility to implement the AfDB Report recommendations with immediate effect and with expected tangible results in the next two years,” he highlighted.

Dr. Matsheka to reform parastatals
A subcommittee of cabinet will undertake a comprehensive review of the parastatals’ landscape is on the cards, Minister of Finance and Economic Development Thapelo Matsheka, has said. According to Matsheka, when establishing the parastatals, the government had specific developmental goals to achieve, which it was felt could be achieved better and much more efficiently through the alternative delivery model of parastatal, instead of the public service.

“However, the performance of some of these organizations indicates that; either this original assumption was wrong, or there has been some creep in their mandates over time,” he said, adding that whatever the case may be, there is need to revisit most of the mandates and founding statutes of these organisations to address the governance and performance of some of them, and more importantly, align them to the transformation agenda. He said the government will take bold decisions on the reform of the state-owned enterprises during the course of the next financial year, following the recommendations of the Cabinet subcommittee.

Government develops LMIS to address unemployment
The government is working on a Labour Market Information System (LMIS) to address, amongst others, challenges occasioned by skills mismatch and unemployment through monitoring labour market patterns and trends, guiding skills development and providing policy advice on issues of employment, Matsheka has said.

According to the Minister of Finance, the development of the LMIS, which will be completed during the 2020/2021 Financial Year, will provide access to information on labour, education and training from the different sources locally and internationally. “One of the development challenges facing this country is unemployment, especially among young people. In response to the continued high and persistent unemployment, Government, with the assistance of the World Bank, has developed a draft National Employment Policy (NEP),” he said. “The draft Policy, which is still being processed within Government, proposes strategies to address the supply and demand for labour, specifically to address youth unemployment.” 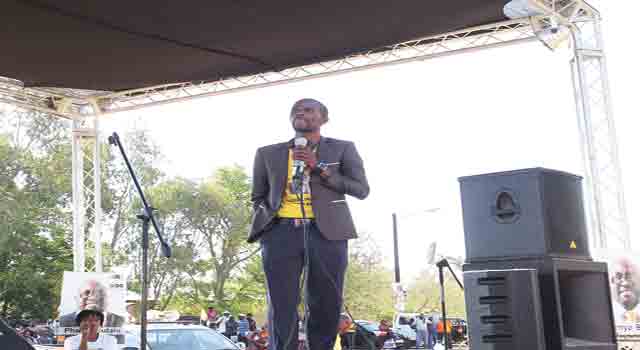