Botswana Unified Revenue Service (BURS) on Monday (yesterday) pounced on Leader of Opposition, Duma Boko in relation to tax evasion charges.
Boko’s taxes have been under BURS investigation since last year. The raid took place yesterday morning at Boko’s residence in Tlokweng and as a result the tax agency officials drove off in Boko’s white SUV Range Rover for the second time.
Last year, Boko was escorted from the Parliament enclave by BURS officials. The BURS officials would later impound his Range Rover SUV. The Botswana Gazette has been informed that following last year’s raid Boko then made an arrangement to settle his outstanding taxes, which later saw his car returned back to him.
However, Boko is said to have failed to keep his word and has been avoiding the taxman for sometime now. During the raid yesterday, Boko was also heard asking the BURS officers about their initial agreement, but one officer replied “Morena, re bona okare ha e bereke (That agreement seems not to be working).”
Boko and BURS officials at the scene declined to comment.
Boko is alleged to have caught the radar of the taxman last year after a letter to Botswana National Front (BNF) Regional chairpersons informing them that he will sponsor the party’s national congress which was held in Rakops. The congress was estimated at more than P2 million.
The BNF Youth League issued a statement immediately after the raid accusing the taxman of being politically motivated by the ruling Botswana Democratic Party (BDP).
“We note with concern and in utter disbelief the rampant abuse of public institutions to wage political battles and sabotage against political opponents by the ruling party.It is disheartening that a country once touted as a shining example of democracy could descend to such low levels and become the quintessence of oppression of political opponents. We learn that BURS a supposedly a political institutions this morning raided Comrade President Duma Boko. Whilst we support these institutions and that they must be left to discharge their mandate absent any interference, we are dismayed by the seemingly determined stance to harass, undermine and embarrass our President in the manner that the BURS does. That it had to be pursued in the manner it was with the media being invited to beam it speaks to the ulterior motive it was meant to serve.We stand firmly in support of our President and condemn the harassment of political leaders and those perceived anti this regime,” reads the statement.
The raid follows the questioning of Tati East MP Guma Moyo last week Friday by the DCEC and BURS over his tax debts. Sources reveal that his vehicle was not impounded following cooperation with authorities and a possible arrangement to sort of the issues.
According to reports, at least US$885 million (approximately P9.2 billion) was in 2015 diverted away from BURS by tax evaders, both individuals and companies. These figures are contained in the Global Financial Integrity’s (GFI) report on illicit financial flows released yesterday. It contains information for the year 2015. Another US$610 million (P6.4 billion) was diverted through the manipulation of export invoices during the same year.
In the 2019 budget speech yesterday, the Minister of Finance and Development Planning Kenneth Matambo revealed government’s plans to intensify tax laws.
He said that the Botswana’s overall deficit stands at P1.98 billion, or -1.1 percent of GDP which was due to lower tax collections during previous years.
“Efforts will therefore, be intensified to ensure efficiency in the collection of tax revenues by the Botswana Unified Revenue Service through the continuous review of tax laws and leveraging on the use of ICT to enhance compliance,” Minister Matambo told parliament. 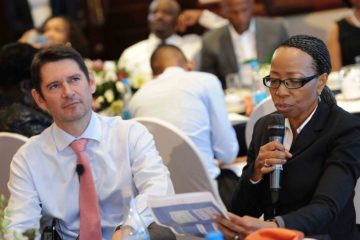