Forty-one-year old Tshephang Oganne of Lekgwapheng ward in Molepolole paid P5000 as compensation for allegedly stealing two cows on 12 March 2015.
She was acting in concert with Josta Ramotlabaki in Setshe cattle post whom the court has failed to locate and Onthusitse Moganana who was also absent from court.
Prosecutor Batsalelwang Mosebola successfully persuaded the court to issue an arrest warrant for Moganana as they do not know his reasons for absconding. The two were to update the court on the issue of reconciliation.
Oganne told the court that she paid on Friday, then called Moganana who promised to go and pay on Saturday. However, she said she was not aware whether he had paid or not.
Magistrate Ike Raphael said since the accused had fully compensated the complainant, he would adjourn the matter to 26 October. He also issued a warrant of arrest for the other two accused. The magistrate said it would be prudent to bring only one witness, namely the complainant, to the next mention in order to save the resources of the court. 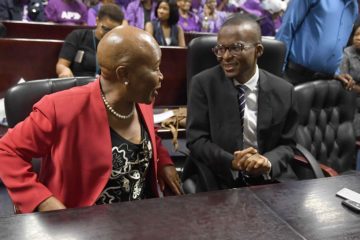