With the Botswana Congress Party having closed its regional offices around the country and having relocated its head office in Gaborone, the debate about party funding shall continue to remain on the lips of many politicians, particularly from the opposition.
BCP spokesperson, Taolo Lucas confirmed the closure of the party’s regional offices in Francistown a few weeks ago owing to dire financial constraints. He revealed that the financial constraints are a product of the recent 2014 elections that saw political parties go all out pouring millions into their countrywide campaigns in a bid to unseat the ruling Botswana Democratic Party (BDP).
Democracy is expensive and has to be paid for by governments willing and wishing for it to prosper and shine.
The BCP performed dismally at the polls only managing to win three constituencies and a sizeable number of council seats nationwide. Before the 2014 General Elections, BCP had 6 members of parliament and the combined UDC had the same amount of seats hence rendering the seat of the Leader of Opposition vacant as the parliament regulations do not cater for an instance of opposition tie.
At the end of the 2014 General Elections, BCP found itself with only three members of parliament. This reduction by half of its members of parliament, and a further reduction of its members of councillors to 58 nationally had grossly crippled the BCP financially as it turns out, it cannot longer afford to sustain its offices.

Estimations are that BCP parliamentarians fork out between P500.00 – P 1,000.00 each in monthly subscriptions and councillors contribute between P300.00 – P500.00 each on a monthly basis. So, the BCP did not only lose 3 members of parliament and a huge number of councillors, but has also lost hugely in monthly revenue. Lucas would not be drawn to disclose the exact figure forked out by MPs and councillors to assist with the party’s daily operations.

If these estimates are anything to go by, the BCP is now making not more that P351, 000.00 annually from its councillors and parliamentarians. This essentially means the BCP has got not more than P 29, 250.00 to spend monthly on rentals, staff salaries, utility bills, branding etc.

Against this, Lucas revealed that the party has relocated its head office to a bigger building behind South Ring Mall but would not disclose the rentals.
On the other hand, the UDC managed to move from six members of parliament to 16 who are contributing an average P 600.00 – P1 000.00 per month to the party coffers. The UDC further has 115 councillors nationally who contribute between P300. 00 – P500.00 to its coffers. This essentially means aside from contributions from membership registration fees, undeclared donors and funders and fundraising exercises,  the UDC is making an average of P192, 000.00 annually from its Members of parliament and P690, 000.00 annually from its councillors thus making an average of P882, 000.00 annually from these contributions alone.

The gaining of 16 parliamentarians and 115 councillors has not only strengthened the UDC’s political strength but has immensely given it the economic stability it needs to continue on a vigorous political drive.

The BCP has over years enjoyed the financial support of the United Kingdom’s Labour Party which has over the years paid for its advertising, branding, posters, t-shirts and flyers. This support enabled the BCP to use its monthly subscriptions from members of parliament and councillors to pay for its office rental, utility bills, staff salaries and daily operations.

Lucas dismissed as baseless the allegations that secret funders backing the BCP who have been mostly attributed to be in the north west of Botswana may have finally given up hope that the BCP will ever ascend to state power.

The Botswana Movement for Democracy (BMD) has since its inception enjoyed the support of the United Kingdom’s Liberal Democrats, South Africa’s Democratic Alliance and largely the Liberal International and the African Liberal Network which the founding President of the BMD, the late Gomolemo Motswaledi was Vice President of. The support included trainings, capacity building, branding, printing etc. This gives the BMD an opportunity to use monthly contributions from members of Parliaments and council members for rentals, utility bills, staff salaries and daily operations.

It is at this juncture that Lucas mentions that State Political Funding which opposition has insisted on for years could level the playing field and enhance the quality of elections, even democracy itself.

Even the DCEC has always advised and supported the motion of political funding citing that it could reduce corruption because the ruling party will always remain awash with money from businesses and parastatals, Lucas said.

“We are available to collaborate with local film producers...” Connie and Shona Ferguson 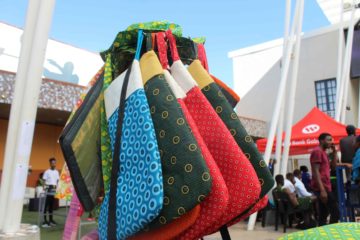