The newly elected Moshupa/Manyana Member of Parliament Karabo Socraat Gare is a man of few words, ‘‘I believe in allowing the deeds to do the talking,’’ he revealed in an exclusive interview with the Botswana Gazette just hours after decisively beating the opposition collective by 4093 votes against the 1530 garnered by the UDC’s Jonathan Sethono at a recent bye election.
Gare replaces Mokgweetsi Masisi who won the constituency in 2014 but who had to vacate the constituency after he took over the highest office in the land, as President of the Republic. In the run up to the bye election, Gare had established himself as a firm favourite, including among his fellow democrats during the party’s primary elections. The young MP reveals that his detractors sought to use his close relationship with President Masisi against him, by alleging that he had an “unfair advantage” over other contenders due to his closeness to the incumbent Masisi, Gare denies this, ‘‘like any aspiring young politician I had to look for a mentor. I had to find someone that I could look up to and that person so happened to be Masisi and I am not apologetic about it.”
Gare reveals that he had established a close relationship with Masisi to enhance his own political acumen long before Masisi himself knew he would one day become president. The 38 year old parliamentary newbie said he has always been active in the constituency as he was preparing for a future in politics. ‘‘As fate would have it, that political future came earlier than I had anticipated when Masisi ascended the presidency in April’’, he said, adding that he had to learn the ropes very fast when it became evident that Masisi ascending to the presidency would create an opening for him in the constituency. Gare has nothing but praises for Masisi for the invaluable lessons he has taught him during their encounters in the constituency. He does not regard Masisi as his friend but rather, ‘‘an elder and mentor’’.
The youthful MP was at pain to explain to this publication that he gets aggrieved whenever people assume he was given special treatment byMasisi, without realizing that Masisi only appreciates his hard work the same way he extends the appreciation to all other democrats who work hard for the party. ‘‘If you want to get into Masisi’s bad books, just try and use his name to gain personal favours. I have never seen a man who abhors corruption the way Masisi does’’, Gare said about his mentor. The Moshupa/Manyana legislator said that in his view, the President is a straightforward person who does not want his associates to use his name to gain access to government tenders and other entitlements.
What is he bringing to parliament? Though he was always reluctant to brag about his academic qualifications during campaign, Gare is an Accountant by profession with qualifications in Association of Accounting Technicians (AAT) and Chartered Institute of Management Accountants (CIMA) at Botswana Accountancy College (BAC). He has a Certificate in Small Business Consultancy from the University of North West and is an accredited Business Management Trainer (accredited by Botswana Qualifications Authority and 20Degrees Consulting in the United States). His work experience includes, among others, Accounts Officer at BNPC, Senior Accounts and Administration Officer at Botswana Railways. He later worked at Local Enterprise Authority (LEA) as Business Advisor for seven years before stepping down to run his own business endeavours and concentrate on politics.
By using his training and experience, the MP says he will lobby government to create a conducive environment for entrepreneurship among the youth. ‘‘Government must encourage entrepreneurship if we are to adequately address the issue of youth unemployment. The youth must be able to create jobs for their contemporaries and not only rely on government as their source of employment’’, Gare said. ‘‘As a Business Advisor I have had the opportunity to interact with upcoming entrepreneurs and I am alive to all the challenges they encounter along the way.” Gare is of the view Government needs to come up with policies that do not make it difficult for the youth to access funding for their business proposals. He cites requirements such as security and land as some of the main obstacles faced by youth entrepreneurs. He intends to use his experience in business development to assist government with the formulation of policies that will be user-friendly to start-up business enterprises.
Gare has promised to advocate for the betterment of the socio-economic status of his constituents during his stay in parliament. The weekend victory is not yet uhuru for Gare as he has just over a year to convince the electorates for another vote of confidence as their representative. “You will bear in mind that I will be seeking a new mandate from the people of Moshupa/Manyana in the next 16 or so months as we will be going to the general elections and until then, I will continue to push where Masisi left off,” Gare declared. He said among his top priorities will be the issues of water and a hospital in Moshupa. He intends to lobby for a temporary plan to address the acute shortage of water while a permanent solution is being formulated. In addition, the MP expressed concern over the poor condition of the roads connecting villages within the constituency. ‘‘We are already addressing the issue of shortage of medication in clinics with the minister of health,” he concluded. 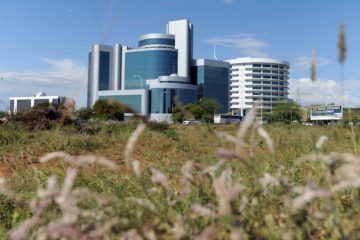