The embattled former head of the Directorate of Intelligence and Security Services (DISS), Isaac Kgosi, has engaged a Malaysian law firm to fight a recent court order for him to be extradited to Botswana where a battery of charges awaits him.

Broadhurst magistrate Tshepo Thedi reinstated a warrant of arrest that she had first issued in July against Kgosi. The order means Kgosi will either return to Botswana voluntarily or he will be forced to.

The Malaysian lawyers will wait for the state to formally make an extradition request to the Malaysian government for Kgosi’s return.

Upon being contacted by The Gazette, Kgosi said he was not willing to discuss the matter while his Botswana-based lawyer, Tafila Tafila, said their hands were tied. “We have given Kgosi feedback about what transpired in court and the court’s position,” Tafila said. “We cannot do anything to assist him now in so far as the order is concerned. But yes, the state is highly likely to implement the order.”

It turned out that Tafila was not aware that his client had already instructed lawyers in Malaysia.

The dispute seems to be headed for a nasty showdown. Sources at the Department of Public Prosecutions say the state is also seeking advice from its Malaysian counterparts regarding familiarisation with the Malaysian law and procedures. Lawyers say Kgosi is likely to argue that he cannot be extradited in his condition and use medical experts to that end while the state here will continue to pour scorn on Kgosi’s claims of illness because it is convinced that its quarry is as fit as a fiddle.

Kgosi ‘s troubles spring from a case in which he has been charged with disclosing the identity of DISS agents and obstructing them in the course of duty. The case is ongoing before Regional South Magistrates Court.

The former spy-chief left Botswana on May 28 this year and ended up in Malaysia where he was later reported to be undergoing surgery that needed anything from eight weeks to six months of close monitoring by specialists in Malaysia.

The court agrees with the state that Kgosi had time and the good health to travel to different destinations like Israel before going to Malaysia but say he violated bail conditions.

When the court requested Kgosi’s travel documents from May 28 to July 13 this year, it emerged that Kgosi had actually spent two weeks in Israel before proceeding to Malaysia. Kgosi’s stay in Israel, Thedi said, meant that he had not been as critically ill and bed-ridden as had been claimed by his lawyers.

“If Kgosi could travel to Israel, there was nothing which could have stopped him from coming to Botswana to report himself to the police,” she concluded. 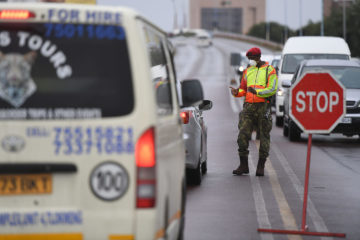