A seemingly photo-shopped picture depicting President Ian Khama wearing a mankini (a brief one-piece swimsuit for men, with a T-back) went viral on the internet over the weekend, attracting discontent and shock; as well dismissal by some who say the picture was satirical and harmless.
As photography and the sharing of pictures on the cyber space becomes more popular, photo-shopping of pictures has also increasingly been exercised and is common. The use of the  software that  allows users to manipulate, crop, resize  or even  correct the color of  digital photos has had  world leaders including  state presidents including Botswana’s being lampooned: the presidents of America Barrack Obama and South Africa’s Jacob Zuma were not sparred either.
In Botswana, other people like the Vice President Mokgweetsi Masisi, Minister of Foreign Affiars Pelonomi  Venson- Moitoi, Assistant Minister of Education Fidelis Molao, Botswana Congres Party president Dumelang Saleshando , former minister of Education Jacob Nkate and former minister of Defence  Ramadeluka Seretse amongst others had memes created about them.
At the center of the debate is a matter of ‘Cultural values and morality versus globalization and freedom of expression.’  Some members of the public are of the view that the creator of the picture must be brought to book, while some hold the view that they were well within their freedom of expression as enshrined under Section 12 of the Constitution of Botswana.  According to Section 12 (1) “(1) Except with his own consent, no person shall be hindered in the enjoyment of his freedom of expression, that is to say, freedom to hold opinions without interference, freedom to receive ideas and information without interference, freedom to communicate ideas and information without interference (whether the communication be to the public generally or to any person or class of persons) and freedom from interference with his correspondence.
The government has since condemned the picture,  saying “We wish to remind members of the public that the laws and norms governing publication of offensive and libelous and/or maliciously false content on social media platforms is no different that of any other media,” a statement from  government spokesperson briefly  reads , adding that  the norms  were in place  not only to protect the dignity of the president but for each individual in the society.  “We welcome the fact that since its publication the image in question has been widely condemned by individuals from across society, underscoring the basic fact that when it comes to upholding basic norms of human dignity we remain a nation united in our diversity.”
Meanwhile, Botswana Police Spokesperson Assistant Commissioner Witness Bosija said his office was carrying out investigations on the matter and that whoever was responsible for the creation of the picture was likely to be charged under Section 91 (c) of the Penal Code. The stated section, which addresses ‘insults relating to Botswana ‘   reads thus, “Any person who does any act or utters any words or publishes any writing with intent to insult or to bring into contempt or ridicule-the Standard of the President of Botswana; is guilty of an offence and liable to a fine not exceeding P500.”

Vice President  Mokgweetsi  Masisi
The Botswana Democratic Party family, as all Batswana are hurt by the brutality of expressions as shown on social media. It is totally affront  to our cultural norms and we will follow it up up.  If need need be, we will make necessary legislative amendments and  culprits will be impeached.

Botswana Movement for Democracy president Ndaba Gaolatlhe
Whatever are the origins or from whomever the picture emanates, it is most inappropriate, distasteful and is an unfair expression of disapproval or hate towards a human being, whether or not that human being is a head of state or not. This we cannot and must not accept as a nation, as a way of expression, no matter the views we hold about one another.
It is of course public knowledge that the movement of which I am a part believes that Botswana is due for a change of leadership, change in the way we are governed, one that will positively transform and cultivate the fortunes and opportunities for our people.
I am personally sorry that this kind of depiction of the country’s President should have occurred and trust in every citizen to reject this behavior as one that is alien to all true change agents.

Botswana National Front Publicity Secretary Justin Hunyepa
The BNF has not taken a position on these pictures.
However we should not forget we live in a global village which has trends. Leaders in other countries  throughout the world have  been photo-shopped  and there wasn’t such an uproar like the one we witness here  today.     If we are going to follow such trends, then this is what we may be susceptible to.  If we say what is being done is against our culture, we should also bear in our minds that the very same culture is dynamic.
In 2014,  President Khama   described  Kgosi Tawana as being  irresponsible, (like Tinto)  in a public rally that he was failing to maintain his family.  This was calculated to embarrass and humiliate Kgosi Tawana. It was as good as stripping Tawana naked, but it was in word form. People were shocked and angry then. Here is another portrait about someone who resembles President Khama, and it begs the question, Is this ethical and morale upright? The boundaries of our morality and ethical standards needs to be defined in this global village,  what we can do and that which we cannot do and to what extent  we go  in following or practicing the global  trends.

UB Political and Administrative Lecturer Dr Bashi Mothusi
The debate  shows  that there is a serious clash between cultural values, norms and modern democracy which comprises of freedom of expression. In other countries like in  America, they can ridicule  their president  as much as they want and it would be business as usual for them.
However, unlike in other countries, our culture does not allow us to depict an elderly person the way President Khama has been shown in the picture. Therefore, where they is such a clash, our culture should guide us on what to do, and in this matter, the President ought to have been given  the respect he deserves as Head of State.

BPP Secretary General  Botho Seboko
I don’t blame those who express their anger in such a manner, but the blame can be attributed to the system’s failure; it births such artistry. There is nothing moral about the dehumanizing conditions that our people live in today so it is wrong to pull a moral card on this one. No one raised a moral card  during the ‘Sebina Saga’ why on this one? President Khama leaves no legacy, so the naked image could depict the bareness of his legacy. We all know it is not his naked body; but art to send a message of how embarrassing our state of nakedness is. Unemployment is a unique form of nakedness, destitution is also a unique from of nakedness but Botswana Democratic Party does not see it that way. Poverty is nakedness because like the art depicts it strips one off their dignity and  the Khama administration is to be blamed.

Naledi Customary Court President Arnold Somolekae
It is totally disrespectful. We are a Christian country and respect of another human being is key.  For those who argue that the western culture has some influence on us and that there is nothing wrong with the picture should explain why then a white woman cannot breast feed in public.
We all know that once someone assumes a certain position in society, they are accorded certain level of respect, not to say ordinary members are not to be respected.
I hope whoever created this picture is arrested and answers for his crime of common nuisance as outlined in Section 176 of the Penal Code.

UB Associate Professor of Law  Dr  Tachilisa Balule
A lot of people actually find it offensive because it is the President. He may actually feel insulted too because many people believe because he is the President, he should not be depicted in that manner. But personally I find it not that palatable. From a constitutional point of view, that person was simply expressing their views. When you are expressing yourself there are different ways one can choose from and this one here is artistic expression. Batswana at times tend to be overly sensitive, but we should appreciate that people enjoy the right to express themselves as that is how democracy is.
The way someone expresses their feelings may shock or offend a  certain section of the society but that doesn’t mean it should be shunned. It calls for the society to be more tolerant.

BOMAWU president  Phillimon Mmeso
We are totally against the circulation of the current photo shopped image, not only because it is the President involved; any leader has to be accorded the same respect he/she deserves. We are a nation that subscribes to the notion of Botho hence should not allow ourselves to be clouded by the western cultures and forget where we come from.
As much as we can adapt to the western culture , we should always make a careful consideration in choosing some of their ways to avoid copying habits that will at the end of the day erode our morals and culture. It doesn’t mean that if it has happened in other countries we should also do it, it is not right. We highly advocate for freedom of expression but Batswana need to understand that “your freedom of expression stops where someone’s freedom of expression starts.” 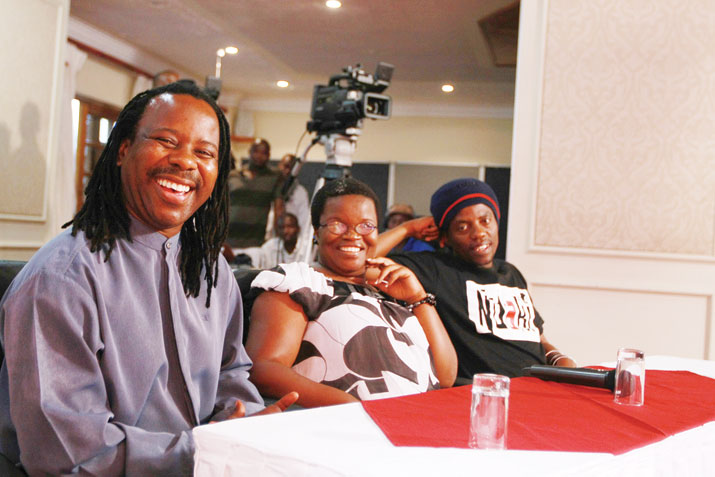