With his sturdy sideburns, he looks like a hard-boiled Los Angeles cop from a 1970s crime show, where he looks down from the president’s portrait hanging on the walls of every public space in Botswana. And hard-boiled, he is, Ian Khama, who after a career in the military became the country’s president in 2008, Erik Esbjornsson analyses.

In 2015, he steered the levers in a helicopter when he invited Miss Botswana on a ride and occasionally he has created headlines by taking over the controls in the government aircraft. Khama started his military career as a pilot, and against this background, it is no wonder he wants to buy spearhead technology like Gripen, no matter what critics say.
He is also hard-boiled towards the media and the opposition, as well as against the unions. Lately he has attacked the right to collective bargaining in the country, something that ought to worry about a former industry union boss like Swedish Prime Minister Stefan Löfven. But instead, Löfven chooses to describe the criticism from the local opposition as “patronizing”, even though they are evidently punching from an underdog position.
Botswana is a democracy, one of the most developed in Africa, of that there is no doubt. However, most analysts agree that it’s not developing in the right direction. It is easy for a regime to be grand and generous when the BDP party has been in a charge throughout Botswana’s more than 50-year history, but its face is changing under increased pressure – just look at the ANC’s growing desperation on the other side of the border to the south.
In the last election, the opposition gathered more than 50 percent of the votes but they were divided into two parties and with a majority voting system such as Botswana’s it meant victory for BDP. Now the opposition has created an electoral collaboration, which means that they will take over leadership in a historical change of power in 2019, if today’s numbers stand and if they keep the peace among themselves. Everything points to this and therefore it is no wonder that the military procurement is described by the opposition as rushed and without any kind of transparency.
The Swedish government is likely to take note of the Botswana opposition promises to break up any possible Gripen agreement in the event of a possible election victory in 2019.
Looking at Botswana’s actual need for equipment , one can say that their current jet fighter fleet is aging. But Botswana is one of the most peaceful countries in Africa, located in the middle of the most peaceful part of Africa. They have good relations with all neighbouring countries and the biggest security concern is the poaching of the huge elephant population.
There is also a need to protect the important diamond industry that gave the country a GDP four times greater than the average in Africa. Four countries border the so-called Caprivi strip in Namibia, north of Botswana, and all of northern Botswana is very sparsely populated, which increases the risk of contraband trade and smuggling.
Is Gripen the right means for monitoring these areas? According to Stefan Löfven, it is “patronizing” to have opinions about this.
Jakkie Cilliers, chairman of the respected think tank Institute for Security Studies, supported by Sweden, believes that no country in Africa really needs this. Helicopters and paramilitary ground troops are more adapted to African conditions, he believes, as well as drones. The question is whether Saab made an attempt to market its offerings in this growing product range as an alternative to Gripen. The company has been in Botswana since early 2013. They rent premises in Sweden House, formerly the Swedish Embassy in Gaborone, and subsequently residence for Business Sweden (formerly the Swedish Trade Council). The premises are located on President’s Drive, close to Ian Khama’s Presidential Palace.
When Khama was asked by DN’s Mats J Larsson if he did not think about cheaper alternatives like drones, he answers:
“Maybe we’ll buy bows and arrows instead. They are even cheaper than drones”.
Opposition leader Duma Boko is perplexed by the statement saying that it shows how Khama is not used to having to answer critical questions from the media. When DN told journalists and politicians that a press conference with Khama was scheduled in Stockholm, most people involved were surprised – it is not a common event in the country.
Alliance colleague Dithapelo Keorapetse, MP and spokesman for the BCP party, wrote in a text message that “it’s typical for his government to trivialize serious public policy issues when accountability is demanded.” Keorapetse believes that the money is needed elsewhere. If the transaction, as has been claimed in the media, is worth 14 billion krona, it represents over ten percent of Botswana’s GDP. 19 percent of the population lives in poverty. Duma Boko notes that a flight hour with the Gripen costs about the same as an annual salary for a nurse.
I call Keoopetse Paphane to double-check the statement and ask for entry level salaries. She is the Secretary General of Bonu, the national union for nurses.
“Why should I answer this? You may call the president’s secretary if you have questions about our wages. I only represent the country’s nurses, I can not go against my own president, “she says, ending the call abruptly.
Erik Esbjornsson contributed the opinion piece for The Botswana Gazette. He is a Swedish reporter currently based in Kenya and does trans national reporting. 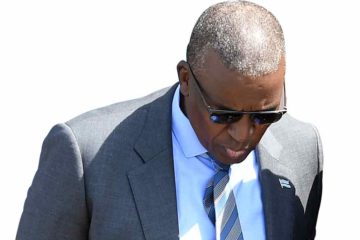