Minergy Botswana, the coal mining and trading company that owns Masama Coal Mine at the Mmamabule Coalfields, has reported a devastating impact of COVID-19 that saw sales limited to certain “essential supply” to customers from stockpiles existing at the end of March 2020, Morne du Plessis, the CEO, says in the company’s financial results for the year ended 30 June 2020.

“Ninety percent of the target market was shut down during this period,” he notes. “Sales volumes showed a slow recovery in June 2020 as customers started to return to operations following the lifting of certain of the lockdown restrictions applicable in South Africa.”

In the second part of the financial year (March 2020 to June 2020), sales volumes dropped dramatically to roughly 10 to 15 percent of volumes supplied prior to the lockdown, with coal stockpiles at Masama sufficient to cater for the limited demand during this period.

“Even with the later relaxation of lockdown restrictions, access to the border between South Africa and Botswana remained largely restricted, making the delivery of coal both difficult and inconsistent,” says the CEO.

“Minergy’s earnings before interest, tax, depreciation and amortisation (EBITDA) for the period under review amounted to a loss of P95.3 million (2019: loss of P34.6 million) after adding back depreciation of P5 million (2019: P0.5 million),” says the report. “In its first year of operations, Minergy sold 198 000 tonnes from which it generated revenue of P81 million.”

Du Plessis says it is important to note that a comparison between the results for the 12 months ended 30 June 2020 (current year) and the previous financial year to 30 June 2019 is not practical on a like-for-like basis.

“During the previous year, the group was developing the Masama coal mine and advancing it toward operational status,” he says. “During the current period, the group moved into commissioning, ramping up production and sales at the mine.”

In the report, du Plessis notes that Minergy reached some substantial milestones in the first part of the financial year (July 2019 to February 2020).

“Such include construction of the required mining infrastructure, including water and power supplies sufficient for targeted production and delivering on the first signed off-take agreement with a South African cement producer,” he says. “We also managed to secure P150 million in debt funding and to raise P35 million in equity.”

Du Plessis speaks of game-changing opportunities ahead in anticipation of an already submitted Eskom supply tender and progression of the Mmamabule-Lephalale rail link for exports.

Minergy has already successfully delivered six trains of coal to a customer in South Africa. 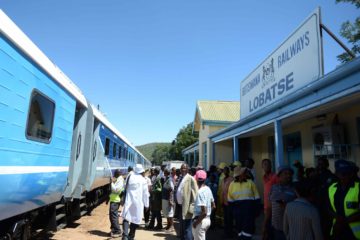