Lucara Diamond Corporation, a company that discovered tennis ball sized diamond, Lesedi La Rona, has made losses to the tune of US$7 million (approximately P69 million) for the first three months of 2018, it has announced.
Net loss for the three months ended 31st March 2018 was $7.0 million (P69 million) almost 6 times higher than the loss of $1.5 million (P14.7 million) in the comparative quarter of 2017. Chief Executive Officer (CEO) of Lucara, Eira Thomas, said the huge loss is attributable to lower revenues, higher depletion and amortization costs, higher administrative and other expenses as compared to the same period in 2017.
During the period, Lucara, the operators of Karowe Diamond Mine in Boteti, achieved revenues of $25.4 million (Over P249 million). The revenues were however lower than $26.1 million (P256 million) seen during the first quarter of 2017. The revenues were for its first regular tender, yielding an operating margin of $170 per carat or 42 percent during the three months ended 3st March 2018.
The company recovered 218 specials (single diamonds, 10.8 carats in size) during the quarter, the third best tally since mining began in 2012.
Operating costs, which are blamed for increase in losses for the quarter ended 31st March 2018 were $17.1 million (around P168 million), an increase of $0.5 million (P4.9 million) as compared to the quarter ended 31st March 31,2017. The costs were excluding depletion and amortization.
Karowe’s overall performance with respect to ore mined, processed and carats recovered was within forecast for the three months ending 31stMarch 31 2018, according to Thomas.
Ore and waste mined was 0.6 million tonnes and 4.0 million tonnes respectively. Ore processed totaled 0.6 million tonnes. There were 218 specials (single diamonds larger than 10.8 carats) recovered, representing 6.8 percent of the total recovered carats by weight.
In April 2018, a 327 carat top white gem and a 472 carat top light brown stones were recovered from South Lobe ore.
As at 31st March 2018, the company had cash and cash equivalents of $43.6 million (around P428 million), a decrease of $17.5 million (P172 million) from the December 31, 2017 cash and cash equivalents balance of $61.1 million. Thomas said the decrease is mainly due to a reduction in non-cash working capital by $5.8 million, capital expenditures of $4.0 million primarily for the sub-middles XRT project audit facility, and capitalized production stripping costs of $6.8 million.
Lucara completed the acquisition of Clara Diamond Solutions Corp. Lucara today 13.1 million shares to the former shareholders of Clara. Further staged equity payments totaling 13.4 million shares become payable upon the achievement of performance milestones related to total revenues (revenues from rough diamonds bought and sold) generated through the platform. Lucara has also agreed to a profit sharing mechanism whereby the founders and facilitators of the Clara technology, and management of Clara, will retain 13.33 percent and 6.67 percent, respectively, of the annual EBITDA generated by the platform, to a maximum of US$25 million per year, for 10 years.
Clara’s primary asset is a secure, digital diamond sales platform that combines proprietary analytics with existing cloud and blockchain technologies to transform how rough diamonds are sold. Lucara is currently working on commercialization of the Clara platform (anticipated in the second half of 2018) and will initially use select diamond production from the Karowe Diamond Mine. Thereafter, it is management’s objective to scale the platform to accommodate diamond uptake from a variety of sources across the supply chain. Testing on the platform has demonstrated the potential to unlock greater than 20 percent of value throughout the diamond pipeline to the benefit of all participants. Clara’s revenue model will be based on capturing a portion of this incremental value. As a wholly-owned subsidiary of Lucara, any revenue from the platform once commercialized will also benefit Lucara shareholders.
Lucara makes most of its money from Karowe.
Karowe Diamond Sales Diamonds are heterogeneous by nature, with thousands of different price points depending on weight, colour, shape, and quality. Diamond production from Karowe is characterised by a coarse diamond size frequency distribution and is positively impacted by the regular recovery of diamonds in excess of 10.8 carats in size, referred to as “specials.” Karowe production is further distinguished by the consistent recovery of high value, gem quality specials. Based on a production profile of 270,000 to 290,000 carats per annum, primarily sourced from the South Lobe, Lucara expects to consistently achieve average diamond values of between US$625 (Over P6000) to US$680 (P6500) per carat. This average diamond value excludes contributions from the less frequent and less predictable recovery of very large, high quality gem diamonds like the historic 1109 carat Lesedi La Rona and the 813 carat Constellation.

NGO pledges to build interim home for children with cancer 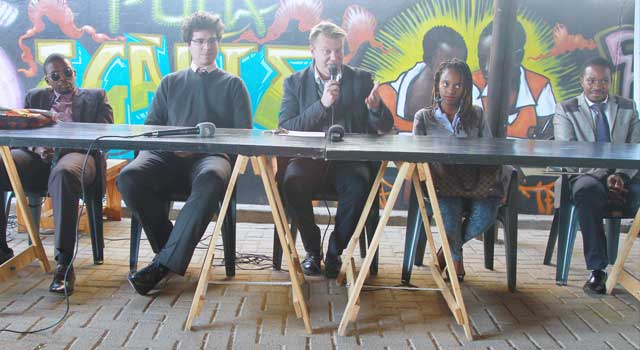