Vice President Mokgweetsi Masisi, who is also Chairman of Botswana Democratic Party (BDP) on Saturday apologised to the people of Tlokweng for what transpired regarding their candidate Elijah Katse in the run up to the 2014 general elections.
Masisi was speaking at a political rally held in Tlokweng over the weekend. Katse is the BDP parliamentary candidate for the upcoming by-election, he won in the primaries where he beat both Thulaganyo Segokgo and Phineas Molefhe. The constituency post became vacant after the passing of Umbrella for Democratic Change (UDC) legislator Same Bathobakae late last year.
“It’s not a secret; we sabotaged ourselves in  2014 but now its the time to correct our mistakes. This is the reason why the opposition managed to win this constituency,” he said.
Katse was the ruling party’s candidate for 2014 general elections before he was recalled by the party,  together with three council candidates for alleged vote rigging during the primary elections. He was later suspended for 60 days and replaced by Olebile Gaborone who lost to opposition candidate, Bathobakae.
“We made a mistake while together in 2014, please forgive us. When a person is able to be remorseful and the other is able to forgive those who wronged him it is a sign that he is a very good leader,” remarked Masisi.
He described Katse as a true leader who is equipped with good leadership skill as he has managed to remain calm and forgive the BDP even when they wronged him terribly . He called out to the youth of the party to be united and guard against all that will try to sow seeds of division amongst them. He also advised Katse to treat all  residents of Tlokweng equally, respect and humble himself always, while canvasing for votes.
“There is no time to be angry or hold grudges against anyone one. I beg that you get into every household and greet them all. Help people even more; then the people of Tlokweng will finally come around and vote for you to win this by-election,” he said.
Masisi also reminded the people of Tlokweng that their issue of land shortage which is currently their greatest concern was being looked into and will eventually be resolved. He promised that as the ruling party they are adressing the issue as it is their wish to see Batlokwa getting land together with their children. 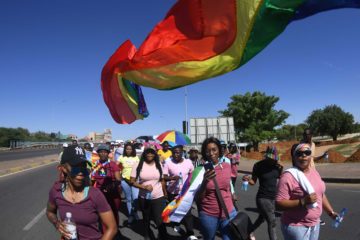