The constant reshuffling of former president Ian Khama’s security detail by President Mokgweetsi Masisi and the Directorate of Intelligence and Security Service (DISS) is costing Khama thousands of pula per month in payment to private members of his security staff, The Botswana Gazette has established.

It is believed that a sizeable fraction of Khama’s security is currently made up of private security personnel. Khama has confirmed that he has spent “a lot” of money on extra security since 2018 when he stepped down as president. According to the Presidents (Pensions and Retirement Benefits) Act, the sitting president is responsible, through DISS, for determining the number of state security officers to be deployed at a former president’s office.

According to reports, changes were yet again made to Khama’s security detail this week. “Yes, it is true,” said Khama. “No reasons were given to us.” He added that there was “little he could do except to plug any gaps”. He would not go into details of how much he has had to spend on extra security since his fallout with Masisi in 2018. However, Masisi and DISS have reshuffled Khama’s staff more than three times.

DISS recently said the recent reshuffling of security at Khama’s office was a part of redeployment of DISS agents across Government Enclave. A recent statement from DISS said the re-deployments were part of Director General Peter Magosi’s strategy of “transforming the DISS”.

“The Directorate, due to the nature of its mandate, cannot be static, particularly in the face of the ever-evolving national security challenges,” the statement continued. “To this end, like all government departments, the Directorate is duty-bound to steer a strategic course that will enable it to perform its mandate efficiently.

“Upon assuming command of the Directorate in 2018, Brigadier (rtd) Peter F. Magosi had the responsibility to transform the organisation. The Director General has himself outlined his road map in several media engagements, in councils and in Parliament. To that end, it goes without saying that the Directorate was always going to undergo changes and the changes were always going to have implications for staff.”

“The Director General also acknowledges that there will always be challenges when implementing changes but will always ensure that any arising issues are addressed professionally and internally. The Directorate would like to assure the public that in its evolution and transformation, DIS has the best interest of staff at heart and their welfare remains prioritised.” 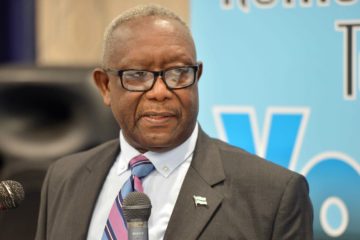