Despite knives being out for him, Gaborone City Mayor Kagiso Thutlwe says he could not be bothered by the ploy of his detractors to discourage and oust him.
Thutlwe told The Botswana Gazette in an exclusive interveiw that he was most surprised by the recent overboard and nuanced political reactions towards what are otherwise normal undertakings by  a person who is mayor.
This is after he came under criticism from opposition quarters after he accompanied President Khama to Lesotho’s 50 Independence Celebrations. A conspiracy emerged recently that Thutlwe was growing too comfortable hanging with BDP leadership, giving rise to fears that he could be headed to the party. His “lavish” lifestyle was also called into question, as it is said to be contrary to “Communist Principles” of the BNF, his current party.

Trip with President Khama
“The  President found it worthy to invite me to accompany him in my capacity as mayor of the first city as he was also told to bring one of his local authorities,” Thutlwe explained.
He explained that the Town Clerk (TC) was left out of this trip contrary to the norm because the invitation was made on short notice and it was virtually not possible to make all neccessary arrangements. “ The TC ‘s office  informed the  President’s office who then offered me space in the  Presidential jet,” he said, adding that they considered the offer since it was “cost saving for the Council as I am to fly business class which is expensive , book into a hotel and get a also get perdium.”
Thutlwe who expressed his disappointment at the backlash against him, explained that it was not the first time an opposition mayor had accompanied the state president to such occassions. “ In  1990, then city mayor the late Paul Rantao formed part of former President Ketumile Masire’s  entourage to Namibia independence celebrations: Why didn’t they start their questioning then?”
He also questioned the selectivism of the people complaining, saying they should have also complained when he traveled to London with Minister Slumber Tsogwane in July, “What  changed now?” he asked, infuriated.  “ I have done absolutely wrong, I have not even contravened  any BNF constitution clause. Besides, I had also informed BNF secretary General of the trip as I always do with my other trips.”

Involvement in BOT50 celebrations
Thutlwe also rebuffed criticism of his participation in BOT50 celebrations after the BNF Secretary General put out a statement saying the BNF would not be party to the event.  “ Such decisions are made by the congress and not an individual. As far as I am concerned,there was no BNF congress that took such a resolution.”
Thutlwe argued that it would have been naive of him to not join the celebrations as he represents people across the political divide, “ Some  of the people I want to lure to opposition are in the BDP and I have to be close to them.” He said that Botswana’s peace should be celebrated despite the current problems the country is facing.

Ploy to oust him
Thutlwe said he was aware of a plot to remove him from the mayoral seat and was ready  for the fight. “  I believe in the caucus of the UDC which put me on this seat when I was elected councillor.   If the same voice within the council that voted for me, tells me to step down, I shall oblige…That is why amidst all the talk about me, I am relaxed in that regard. That is not to say  at times we do not differ, we do so in principle,” he said.

Defection to BDP?
“It  is amazing  and  disgusting  because alot  of the people peddling such issues joined politics  yesterday. They were recruited to  the opposition fold. I was not recruited, I made a choice to join this struggle. I had a choice of joining the BDP  way back during   my junior school days. But I chose the struggle, I chose it on principle  and ideology.  Therefore  my principle is not bought. I am a life card caring member of the BNF and will remain  committed to  the course whether rich or poor,” he said.

On  cigars  and flamboyance
“A lot of unpalatables have been said in  the past about president Duma Boko  regarding his  lifestyle and of  recent the same came to my doorstep. However, is it the clothes I wear or the kind of car I drive   that  define me? Is it the cigar  I smoke that shows  who I am or its what I  stand for and where I want to lead the masses  that define me? “ said Thutlwe who argued that 19th century practises were outdated and would not win them votes.
“ For those who know me from before I bacame mayor , they  know I have I have never lived like a pauper, but I have  remained to  speak for the down trodden and improvement of their lives. Its a cause  I will not betray,” he said, adding “I have liberated myself in the mind  so that I could continue to speak liberation of the masses.”
‘Threats will remain just that, threats’
“ I will not be threatened by  some misled  witch hunting meetings  that are held  in  my name. I am ready to face anyone  who has got  anything against my person  and I challenge anyone who is clean to throw in the first stone.  I am  a soldier  of  the struggle and will die with my gun in my hands  and my boots tied on.”

Gov’t has done nothing to promote media freedom - Dr. Balule 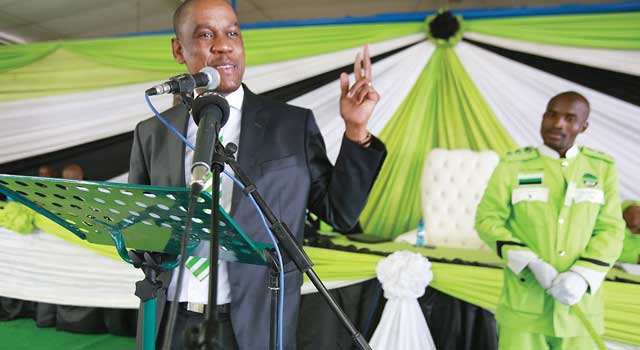