Botswana Democratic Party (BDP) Presidential candidate Dr Pelonomi Venson Moitoi has vented out her frustrations ahead of the much-anticipated party congress scheduled for Kang on April 5.

Her revelations about her intentions to withdraw from the race are reported to have set tongues wagging in her camp, popularly known as New Jerusalem as many of her supporters will be left in the lurch.

Moitoi will contest for the party presidency against the country’s incumbent President Mokgweetsi Masisi in what many observers have described as an unfair race due to the use of state and party resources against the former.

Moitoi held a press conference yesterday where she vented out her frustrations towards the party and her opponents accusing them of being biased towards Masisi. “ I usually enter political races knowing that there are two out comes, its either I win or lose. But in my life I believe political races have to be free, fair and democratic, they don’t have to have any side agendas,” she said at the press conference held in Gaborone yesterday. “This race is however not respecting any of those ideas.”

The Serowe South legislature went on to say that she is at point where she is asking herself if she wants to be part of a race that is clearly riddled with acts that do not represent things she wants to live for. “There is another contest here that I don’t understand; I don’t think people can fight this dirty in a normal democratic race. I wish they could speak the truth, I really don’t know what the DISS is doing in a BDP contest,” she complained.

Moreover Moitoi disposed her displeasure towards the party saying she doesn’t know what motivated their decision of taking the elections to Kang. “ Kang in the first place was an odd selection for a presidential content due to its logistics. I don’t recall of any being held outside of Gaborone, this is the first in a long time,” she stated.

She said it is a norm for some party members to use schools as accommodation but that will be likely halted as Kang has three schools. “The hotels are as well limited. And having realized that I paid a deposit of P 12 000 for eight rooms and managed to get the one other hotel of over 20 room where I paid P 45 000,” she said.

“ I also managed to acquire a small farm but I was surprised last week after being told by the same hotels that the BDP have told them to return my money and my bookings have been cancelled. A member of the central committee at Kang have as well changed padlocks and locked the farm, this happens when the truck is by the gate to drop tents for my supporters.”

The former cabinet member further accused her opponents and the party of rigging the votes. “When you say an election is rigged you are not talking about the counting of the ballots only but you are rather talking about the whole process,” she stated. “When a delegation that is supposed to vote but it is halted from voting from the beginning then that is rigging, this is an election that have been rigged from day one.”

She said she is in a situation where she asking herself very serious questions, “and I’m not going to convince myself that this election is going to run any different on the day when things are going like this. I have since engaged my lawyers, I know that days are passing but for me the moment does not stop until it does.”

Moitoi went on to declare that that she filed her sponsorships letters of fifty delegates with the BDP office. “I have done with a lot of fear, being afraid those who support me are being harassed. The harassment long started with me when I lost my job after showing intentions of standing, my associates are also facing suspensions,” she shared.

“It’s pretty obvious that those associated with me are guilty, so I have been wondering if I should submit these names or not because if I do I might expose them to danger. I submitted those names with fear that they might be harassed and I even told them if that happens I am going to court, we have had enough.”

She said the rules of conduct of the BDP under Bulela Ditswe primarily rule 9 and 10 stipulates that structures or persons in party structures should not take sides with either candidate during a time like this but it was very clear that the structures were running campaigns for President Masisi.

“I can report on cases of intimidation of my supporters, there have been instances when they have been summoned to the State House to meet the President something which raises eye brows and cannot be taken lightly,” she said.

Sources say there is more than meets the eye in the New Jerusalem camp as the former president Ian Khama is of the view that the camp does not stand any chance of winning given prevailing circumstances but Moioti wants to finish what she started. Her move to drop out will leave many of her supporters in the lurch as many are already seen as sellouts by the Masisi camp. 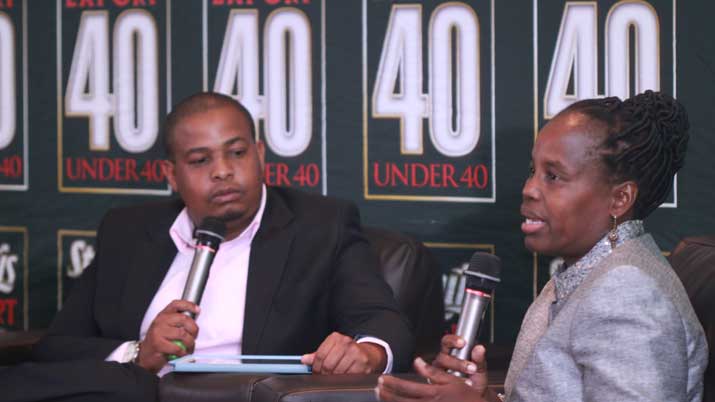