FRANCISTOWN: The recent installation of Isabella Borumolano Tshipana as Mookane village chief has ignited an uproar in which residents threatened to lobby for the snubbing of all government gatherings addressed by top officials.

Tshipana was installed following government recommendations a fortnight ago despite complaints that she was an ‘outsider’. Concerned residents argued that Tshipana has no legitimate claim to Mookane chieftainship as she was only appointed on the basis that her ‘visitor’ father who is from Mahalapye was, 30 years ago, tasked to mind the Kgatleng/ Ga-Mmangwato border line. They argue that while Tshipana’s father was appointed due to his capability, he had no relations and claim to Mookane bogosi.

“We want Silas Keitumetse as our chief, not someone who is imposed on us. We have long raised this concern and all our efforts fell on deaf ears. We wrote to the Ministry of Local government and Rural Development Planning but the response we got suggests that the procedure was followed. Also we wrote to Paramount Chief of Bangwato regent Kgosi Sediegeng Kgamane but he refused to respond to our pleas.  Whoever tried to raise this issue was victimized and threatened,” one of the protestors told The Botswana Gazette.

“Should government fail to reverse its decision, we will mobilize the villagers to show their displeasure by boycotting all meeting addressed by government top officials. More importantly if necessary we will not shy away from raising our displeasure by boycotting the coming general elections because there will be no need to participate in the elections of people who do not respect our wishes,” the protestor said.

An aggrieved village elder criticized Mahalapye East MP Botlogile Tshireletso for installing Tshipana. “When we raised this issue at the kgotla meetings we were victimized and threatened by police officers who were always brought. It was evident that these police officers were brought to threaten whoever is against the appointment of Tshipana.”

Tshireletso however washed her hands of the matter, saying she knew nothing about the issue. “I once learnt about these concerned residents during my kgotla meeting but I did not want to be involved in the issue because I know nothing about Mookane chieftainship. In fact, I thought the issue had long been put to rest because we have already crowned the chief,” she said.

Kgamane himself did not want to discuss the matter through the phone insisting that it was sensitive. “I no longer do telephone interviews because I am afraid of being misquoted. So please find time and visit me for the interview, that is when I can answer any question,” he said. 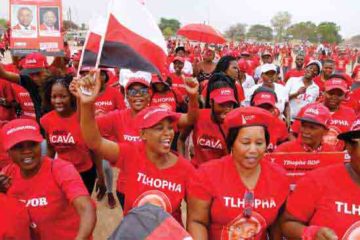