The National Executive Committee (NEC) of the opposition Umbrella for Democratic Change (UDC) is expected to meet before the end of the year to chart a way forward after its recent poor showing in the general elections.

Key on the agenda will be discussion of the leadership of the party into the future.
UDC spokesman Moeti Mohwasa (Monday) confirmed in an interview with The Botswana Gazette yesterday that an NEC meeting was due but would not commit to a date. “For now it is business as usual,” he said. “We are continuing as normal. The NEC has to meet and discuss issues. That is where issues are discussed.”

Mohwasa added that the issue of the UDC Congress would also be discussed. The coalition movement has never held a congress since its formation in 2011.

The UDC, especially its leadership, has been under fire as a result of its shabby performance in the October 23 general elections from where it emerged with a paltry 15 parliamentary seats out of a total 57 on offer and two short of its showing in 2014. The party lost its safe seats and strongholds such as Gaborone, Ramotswa, Mochudi and Jwaneng-Mabutsane.

However, positives will be drawn from the fact that the UDC was able to steal a few constituencies in the Central District that had been under the ruling Botswana Democratic Party (BDP) since independence.

As calls for re-organisation gain momentum, the vice president of the Botswana National Front (BNF) Prince Dibeela was quoted by this publication as saying UDC leader Duma Boko was squarely to blame for the election flop. He pointed to Boko’s embrace of Botswana’s divisive ex-president Ian Khama as a particularly bad move that cost the coalition seriously.
“If things continue like this, I think the coalition will not survive a few more months,” said Dibeela whose party is a part of the coalition UDC.

UDC activist and former sectretary general of the BNF Youth League Arafat Khan said, “we have been witnessing an unfortunate and scathing attack on BNF President Boko by BNF Vice President Dibeela. This is utterly shameful and despicable for the whole Vice President of the Party to publicly ridicule and belittle his Party President . Dibeela has become notorious for this kind of reckless behaviour in his attention seeking spree. He enjoys making news headlines that hurt the Party and dent its image.”

Despite this, Boko’s deputy Dumelang Saleshando of the Botswana Congress Party (one of the three parties under the UDC), whom some pundits have suggested should take over the reins and lead the UDC, is not abandoning Boko at this testing time for the larger-than-life president of the UDC.

Recent reports have been about the BCP pulling out of the UDC in the wake of its shameful performance in the elections. However, the leadership of the BCP says nothing of that sort will happen. 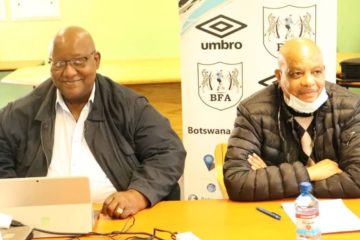