Botswana Police Commissioner Keabetswe Makgophe says intensified traffic law enforcement resulted in the arrests of 347 967 motorists for road traffic violations in 2016, a 22% increase from 285 121 recorded in 2015.
This is an average of about 953 arrests every day in 2016.    Makgophe revealed the statistics at the 45th Senior Police Officers Annual Conference last week where he said 450 deaths from road traffic accidents were recorded in last year compared to 411 deaths in 2015.
Makgophe said they were concerned by the increasing and unnecessary loss of human life in roads as a result of over speeding and drunken driving, which he said, led to their intensified traffic laws.  “I want to assure the members of the public that intensification of our enforcement efforts is geared towards ensuring compliance with provisions of the law and to saving lives on our roads as opposed to raising funds as has been suggested from some quarters,” he stated.
To that end, the police conference resolved with regards to loss of life due to excessive speeding, drunken driving and bad driver attitude “to adopt zero tolerance to all road traffic violations, implement target traffic law enforcement activities towards the youth who are prone to Road Traffic Act violation.” Furthermore, they resolved to engage relevant stakeholders with a view to improve driver training.
Meanwhile, speaking at the same conference, Minister of Defense, Justice and Security Shaw Kgathi expressed concern at the growing incidents of police vehicles being involved in road accidents.  According to Kgathi, 414 police vehicles were involved in preventable accidents between January and December 2016.   He said while he appreciated the fact that the accidents could be caused by external factors, it was however difficult to balance the role of such external factors vis-a-vis the fact that the reported accidents were said to be preventable.
“The most frustrating and disappointing thing is that the custodians of the traffic laws are the ones who are violating them,” Kgathi said, stating that the SSG branch recorded the highest number of accidents.   Furthermore, he explained that the involvement of police vehicles in accidents have resulted in a cumulative reduction in government vehicles allocated to the police services and that a total between P1 million and P1.5 million was lost in revenue in repairs of the vehicles.
He said in terms of policing districts, District 3 (Gaborone-Broadhurst) recorded the highest accidents involving police vehicles at 72, followed by No.13 (Mogoditshane) at 64 while Mochudi and Letlhakane recorded the least accidents at 9 and 6 respectively.  He said while some may regard the list as some mundane detail not to be raised by a minister or that it was some kind of naming and shaming, “This is not about that. It is about dealing with a serious and real matter and the need for care and accountability by each one of you in your branches, policing districts and the stations in respect of the vehicles allocated to you.”
Kgathi told the police officers that while the Commissioner and the Permanent Secretary   were collectively held accountable for the accidents, he also accounts to the cabinet and parliament what he said was beginning to be regarded as reckless.  He said the accidents, which led to the reduced number of vehicles allocated the police service threatened the efficiency and effectiveness of the police. “From now on, this must come to an end. Otherwise why are you in the business of policing when you are the ones who need to be policed,” he cautioned.

The Death of Nchindo - No “second cut” of History 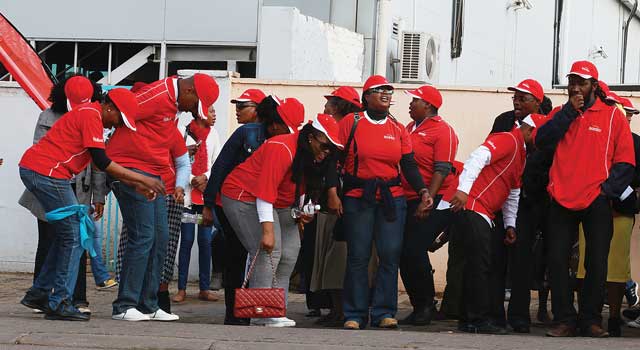