The Umbrella for Democratic Change (UDC) councillor for Sefhoke ward in Tlokweng, Phenyo Segokgo has retained his position as chairperson of South East District Council (SEDC).
He retained his position unopposed on Monday. The Botswana Congress Party (BCP) councillor Andrew Mabeo was also unopposed for the position of deputy chairman. Segokgo assumed the SEDC chairmanship when he became a councillor in 2014 and was ushered in unopposed even then. Speaking to the Botswana Gazette immediately after his re-election on Monday, the youthful councillor thanked SEDC councillors for believing in his leadership and said his main focus for the next 2 and half years before the general elections is to improve internal roads in Tlokweng.
He also said his council intends to improve the storm water drainage and waste management in the district. Segokgo, who recently relinquished his presidency at the BMD Youth League, said one of his priorities will be the creation of jobs through Public Private Partnerships.  ‘‘We are doing minimal storm water drainage at a cost of P4 million and working on the implementation of the Tlokweng Development Plan so that we can avail plots to residents of Tlokweng’’, said Segokgo with visible elation.
He promised to continue leading the council to his level best and encouraged fellow councillors to serve Batswana with diligence.
Reaboka Mbulawa Dethroned in North West District Council
Meanwhile in Maun, Botswana Democratic Party (BDP)’s nominated councillor Reaboka Mbulawa has been dethroned as the North-West District Council (NWDC) Chairman in an election also held on Monday.
Mbulawa got the shock of his life when some BDP councillors defied the party caucus which was said to have agreed to retain him as chairman but instead voted for another BDP councillor Duncan Enga who got 28 votes while Mbulawa trailed behind with 19. Mbulawa, who is also the director of the successful tourism enterprise, Savuti Khwai Linyanti (SKL), was nominated to the NWDC council in 2014 after his parliamentary ambitions were dashed by Tawana Moremi at the general elections. He was then elected Chairman for North-West District Council after garnering 29 votes over Galaletsang Mhapha’s 18. 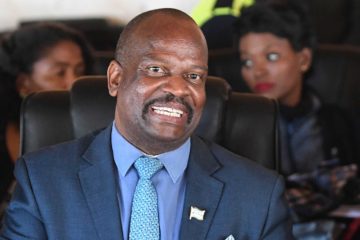