As trouble brews for Mogae at the next board meeting where Ramachandran Ottapathu, Farouk and others aim to toss Botswana’s former president from the chairmanship of the Choppies board because he is “too old” and and is “in it (only) for the money”, the retail conglomerate is still encircled on all sides by problems that purportedly prompted Mogae to suspend Ram and is yet to publish its financials. KEABETSWE NEWEL and TEFO PHEAGE report

Ram says the Choppies board was tasked with evaluating management’s actions in ensuring the integrity and reliability of the group’s financial systems and reporting. And even though (Botswana’s former president) Festus Mogae was “clueless” about things, the buck stopped with him as board chairman, Ram emphasises.

“He was clueless on how Choppies was run,” he says. “He didn’t even care to scrutinise presentations and information that placed before the board. He has never run a single business in his life, which goes for the entire board of directors. All of them were in it for the lucrative board allowance payments.”

Infact, says Ram, Mogae neglected his chairmanship duties so much that he hardly attended board meetings for the past three years. “For the few times that he attended the board meetings, he would doze off and sleep,” he avers. “That was to be expected because he is old. He is 81 years old and needs to rest.”

The Botswana Gazette understands that two years ago, Ram attempted to convince him to step down from the board chairmanship and make way for someone younger but with experience and technical expertise in the retail business. “He was angry and shot me down,” says Ram. “In his view, I was trying to get rid of him and he would not allow that.”

He paints a picture in which diplomatic duties which took Mogae away from Choppies where he was supposed to oversee and provide stratergic direction. A peek into the 2017 annual report shows that Choppies had four board meetings but Mogae only attended two of them. Further, there were seven committee meetings which all board members attended save for Mogae. Ram said Mogae never bothered to come back to him and go through what was discussed at the board meetings. “Where his approval was needed, he would just tell me over the phone to proceed, saying he trusted my judgement,” he says.

The Botswana Gazette understands that on Friday 17 May, the shrewd Indian businessman wrote a letter to the board proposing for Mogae to step down as chairman and make way for someone else. Further, Ram also proposed to restructure the board and bring in more directors with experience in the retail business. He also wanted to create the position of Deputy CEO and bring in a person who could understudy him for two to three years with a view to succeeding Ram as CEO. After Ram’s proposal, a soiled boardroom war ensued, resulting in the board deciding to suspend Ram under the belief that he was trying to get rid of the current board. Save for Farouk who was against the suspension, all board members were against Ram.

Ram says Mogae was in it only for the money. “Being on the Choppies board is a lucrative position,” he notes. In any company, the board chairman only gets paid a sitting allowance and not a salary. Only an executive chairman, who is involved in the day-to-day running of the company, gets paid a salary. Mogae was a non-executive chairman and so was not involved in the day-to-day business of Choppies, but The Botswana Gazette has found evidence that Mogae was paid a monthly salary as well as a board sitting allowance. The Choppies 2015 annual report shows that Mogae was paid P529 392 as salary, which translates to P44 116 every month.

Further, he was paid P133 333 as board sitting allowances, bringing his total pay in 2015 to P662 725. In 2017, he was paid a total of P662 724. Details of his remuneration in 2018 are unavailable since Choppies is yet to release its 2018 financials. However, Mogae was the fourth largest earner at Choppies, trailing behind Ram who earned P10.7 million annually and Deputy CEO Farouk Ismail who raked in P5.6 million in 2015. Mogae earned close to the Chief Finance Officer (CFO) Sanooj Pullarote whose total pay in 2017 was P1.7 million.

“I did nothing wrong,” he says, adding that by removing him they want to undo his achievements. “I was running Choppies alone. All these board members are clueless. I have built Choppies to a leading regional retailer with 260 stores employing 18000 people. I will be vindicated.

In a previous engagement with the CEO of Botswana Accountants Oversight Authority (BAOA) Duncan Majinda, Mogae was called upon to explain the mess and Choppies as board chairman. Majinda then said Mogae was a crucial player as Chairman in that he should be aware of any transactions and major decisions which affect the company’s financials. BAOA provides oversight to accounting and auditing services firms and is mandated to ensure that the audit profession in Botswana gives investors and all stakeholders accurate information for the protection of their investments.

Through the Financial Reporting Act, BAOA is the supervisory authority of all Public Interest Entities (PIE). It was established through an Act of Parliament and is answerable to the National Assembly and the Minister of Finance and Economic Development. As a listed firm Choppies is a Public Interest Enterprise (PIE) and it falls under BAOA’s regulation.

Statesman Mogae was and is still the board chair of Choppies. All board sub-committees fell and still fall under Mogae’s supervision and he may have been aware of alleged ‘falsification’ of books and related party transactions which directors allegedly financially benefitted from and chose not to fully disclose and still turned a blind eye. According to the authority together with other board members Mogae should face the heat. The chief executive of BAOA says he was waiting for the legal, financial and forensic investigations into Choppies to be completed so he may use the findings to hold the board to account.

Well-known for his unconventional and impulsive reaction to criticism, the former president says he will not be tempted to respond to Choppies’ deposed CEO. On Friday last week, The Botswana Gazette approached Mogae at the Choppies offices after he addressed Choppies senior management but he declined to engage this publication. A request was sent early last week to his office for Mogae to engage this publication on the matter but it was also turned down. Mogae’s personal secretary, Rhee Hetanang, said the former president, said his boss did not want to take the issues to that level.

Meanwhile, Mogae was at pains on Friday to explain his decision to suspend Ram to Choppies management. At the meeting, management led by the Chief Operations Officer, told Mogae that they did not agree with the board ‘s decision to suspend Ram because that had the potential to cripple the business. Management revealed that Ram was the nerve centre of Choppies as he directly deals with suppliers, lenders and all aspects of the business. The Choppies management further reminded Mogae that Choppies Staff was worried about the development but Mogae calmed the situation and reassured the management that everything would be resolved in due course and that Ram would be reinstated. Mogae revealed the move was only a precautionary measure because the board had to be seen to be taking action as a way of reassuring shareholders that all was under control.

Ram said his lawyers were busy at work to challenge the decision because as far as he was concerned, the board had not proved any wrongdoing on his part to warrant the penalties directed at him. Last Friday Ram wrote to all shareholders requesting a meeting where it is believed that he will use his shareholding to convince other shareholders to vote against the board’s decision to suspend him and consequently dissolve the entire board and recruit new directors. The meeting is expected this week. Ram has 19.5 percent shares in Choppies and Farouk, who is fighting in Ram’s corner, has 14.8 percent. The two enjoy the backing of fund managers who hold shares on behalf of institutional investors, especially the Botswana Public Officers Pension Fund (BPOPF). The Fund Managers are Allan Gray, African Alliance, Investec and Stanlib to mention but a few. 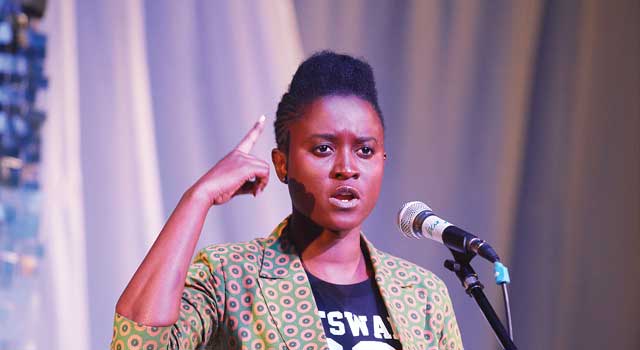