RESTRUCTURING THE JUDICIARY
President Mokgweetsi Masisi said his focus and priority this year is on restructuring the Judiciary to make it more relevant and responsive to the emerging trends of the 21st century. He said government has established a Corruption Court to deal solely with all forms of corruption. This is also intended to enhance the disposal of these cases which tend to take long to prosecute. The Court will be rolled out to other High Court divisions since it has been operating at only one High Court.

RELIANCE ON DIAMONDS
Over the first seven months, an array of inter related developments across the entire value chain have exerted pressure on Botswana’s diamond production and sales. Despite the prevailing challenges in the sector, Botswana remained the single largest contributor to the increase in the value of the world’s diamond production in 2018, as output increased by 6 percent to 24.4 million carats while the average price earned for our rough diamonds remained steady at $145 per carat.

BCL LIQUIDATION CONTINUES
The report from the Task Team, set up to evaluaste BCL assets, was submitted to the new liquidators to consider the findings and facilitate decision making on the next stage. Since taking over the liquidation process in August this year, the new Liquidator has given seven (7) companies permission to carry out due diligence reviews on the BCL and Tati Mining assets, to inform themselves if they can invest in the assets.

FOREIGN RESERVES DECLINE
As at December 2018, foreign exchange reserves stood at P71.4 billion, a 3.2 percent decline as compared to P73.7 billion recorded in December 2017. However, as at August 2019, the reserves stood at P74.2 billion, an increase of 3.9 percent compared to the level attained in December, 2018. This increase was due to gains from asset price changes, exchange rate movements and income on reserves.

EASE OF DOING BUSINESS
Government is in the process of developing a secure and integrated online service system that will interface the business sector with the immigration and civil registration systems to ensure service efficiency by Government. This will target immigration services.

EDUCATION
Government continues to implement the Inclusive Education Policy of 2011 to ensure access and equity in education particularly for learners with special needs as supported by the Sustainable Development Goals (SDGs). Moreover, Government has commenced the process of developing a language policy in readiness for the introduction of other languages in schools. The establishment of the Botswana Teaching Council (BIL) which is aimed at professionalising teaching was passed by the July 2019 Parliament Meeting and preparations for its establishment are underway.

FIRST NATIONAL REHAB
Government has identified the Old Serowe Institute of Health Sciences (IHS) as a facility that will serve as the first National Substance Use Treatment Centre. Both in and outpatient services will be provided for in this facility.

REVIEW OF THE MARRIAGE ACT
The Marriage Act is currently under review to provide for amongst others, the registration of religious and traditional marriages, monitoring and regulation of appointed Marriage Officers, as well as to review the age of consent for marriages.

BMC TO PRIVATISE
The implementation of the strategy to liberalise the Botswana Beef Export market calls for the restructuring of the Botswana Meat Commission (BMC), separation of the linked abattoirs of Lobatse, Maun and Francistown, and the privatization of the organisation.

It has been necessary to review the sales and marketing of the BMC Beef and removal of its export monopoly as well as its distribution to various regional and international markets to ensure value for money and the sustainability of the company. This will yield a competitive price structure and an improved turnaround time for payment of farmers.

MEDIA FREEDOM
“we are ushering in airflow of media freedom; there is a discernible current of business confidence in the country; we are assured of the freedoms guaranteed in our Bill of Rights, and the atmosphere that permits individual freedoms devoid of fear or anxiety,” Masisi said.

RE-LABELING OF MINISTRIES
In order to improve public service efficiency, Masisi said Government has embarked upon a rationalization exercise of ministerial portfolio responsibilities and functions. This is aimed at improving service delivery as well as eliminating duplication and overlaps. Ministries will be re-labelled. 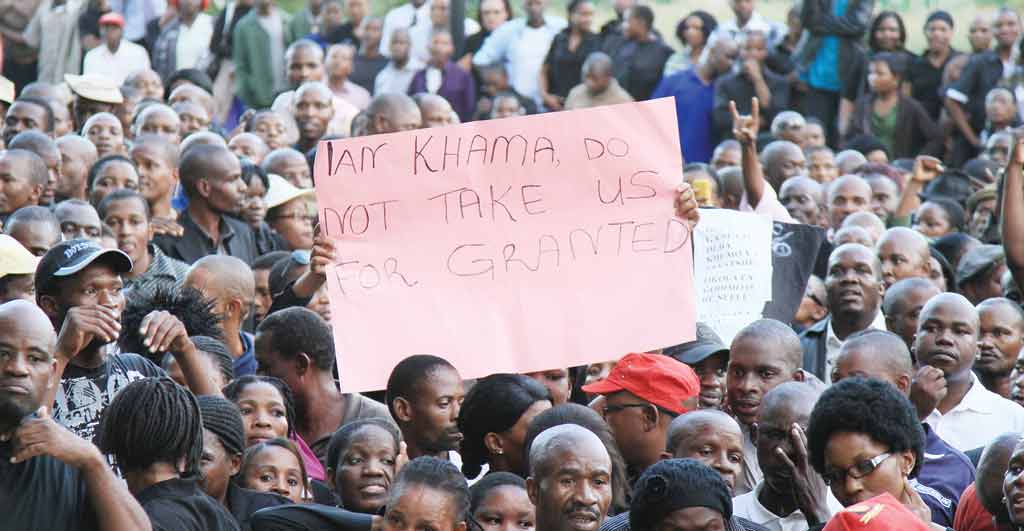