January 14, 2021 Admin
Home»News»Investigations»UNODA MACK: A Thorn in the Foot of the DPP
Investigations/News

Think of any high profile criminal case: Somewhere nearby there is a tall, low-key legal guru from the village of Masunga in the North East District who shuns the haute couture brands that have come to define most lawyers. This is Unoda Mack, a partner at the two-decade old Mack Bahuma Attorneys and a ruthless cross-examiner. TEFO PHEAGE spoke with him recently

Many a time people ask: Is it because the cases and prosecutors are weak or the lawyer is simply darned good? The truth, some say, clearly lies somewhere in between the two extremes. The point is that while the Directorate of Public Prosecutions (DPP) parries its share of punches from a disappointed public for its schoolboy errors in high profile cases, on the other side is a man who is its former employee but is now taking all the limelight.

More and more, people think he could very well be the best criminal lawyer that this country has ever produced. In his heyday, one of the most decorated local court reporters, Khonani Ontebetse, would not miss an opportunity – sometimes out of nowhere – to wax lyrical about Mack’s magical exploits in the courtroom as he annihilates not only opposing witnesses but the case itself. Whenever the lanky senior reporter was volubly mesmerised by Unoda Mack, everyone knew that two things must have happened that day: Mack had been in court and taken the train off rails to the detriment of a certain party.

In the corridors of newsrooms, Mack is known as the pain in the DPP’s something while in the legal fraternity he is the go-to learned friend or consultant in life-and-death type of criminal cases who is often roped in at the last hour to redeem a drowning case. To high profile criminal suspects, Mack is “the anointed one” who can restore their freedom. And Mack indeed has freed many who were already convicted by the ruthless court of public opinion where perception tends to matter more than facts.

Advocate Sydney Pilane, undoubtedly one of the country’s finest lawyers, ascribes Mack’s proficiency to his insatiable appetite to give a case his all if he believes in it. “He is very professional and ethical and can be relied upon to give it his best. I led him and another in the conduct of an exceptionally difficult murder case several years ago. He was an indispensable addition to the team and an insightful thinker and strategist,” says Pilane, who adds that he would not hesitate to recommend Mack to anyone in need of an exceptional criminal attorney.

The 54-year-old native of Masunga completed his law degree in 1991 at the University of Botswana and was classmates with none other than Stephen Tiroyakgosi, the DPP director who has now, by dint of his office, turned into a rival. Other notable classmates of Mack’s include Parks Tafa, Isaac Bahuma and Annah Mathiba, who are doubtless among the crème de la crème of the legal profession in Botswana

“I cut my teeth in the legal profession at the Attorney Generals Chambers in 1991 as a state counsel under the tutelage of Samuel Afful,” says Mack of himself. “It is to him that I owe my depth of knowhow. He instilled in me strong foundational essentials of a prosecutor and lawyer and taught us to never burden the courts with our opinions but evidence for the court to decide.”

He reveals that in his youth, he tended to want to emulate Samuel Afful’s arguing and cross-examination style but in time developed his own. “Samuel was aggressive and ruthless in court,” he says of his mentor. “I prefer the soft style while studying the attitude of the witness. If it becomes necessary to change gear, I do so.”

Like many of his colleagues, this legal beast is a fan of soft-spoken Dick Bayford who is known across all professions as the embodiment of humility. In fact, Mack says given a chance to work with one local lawyer, it would indubitably be Bayford. “He is a complete lawyer,” he asserts, as if in summation. “A strategist of note and a man with a big heart, Bayford is a principled and a humble servant of the law.”

Also like many of his colleagues, this Gaborone-based lawyer has led life from both sides of the aisle as prosecutor and defence. He expresses strong views about he current office of the DPP  and posits that if nothing is done to remedy the situation there, this country will bleed a lot more compensatory money due to the current director’s charge-and-investigate-later modus operandi which Mack describes as a serious affront to the dictates of the profession.

Mack allegedly turned down efforts to recruit him to the powerful post recently. Would he assume the post this time around if his recruiters returned to him? My main concern is a series of schoolboy errors that have come to characterise the DPP. “It is these stunts that will cost the state and taxpayers heavily and unnecessarily,” says the man behind the collapse of the high profile P250 million National Petroleum Fund case and the P100 billion cases that seem to be falling apart day and after day.

But he attributes his success in these cases no less to doing his homework thoroughly and dismisses outright any suggestion that he made a killing in boodles. “I didn’t make a lot of money as many claim. I was availing my services to help a cause for justice. Who continues to chase somebody for stealing money at the Bank of Botswana when the bank has been screaming that they don’t have any money missing?” Mack queries, his face a cross between humility and quiet confidence.

Mack says he has successfully defended as many criminal suspects as he has sent to the gallows. Even so, he hesitates to answer a question about how many condemned prisoners he has under his belt before settling for the hedge: “As state counsel I had to do my job. I am not a fan of capital punishment. I prefer life sentences.” he returns, fixing his gaze upon a hollow space in his office. Mack then shares excruciating episodes of his physical and emotional contact with the death penalty. He recalls the famous case of white murder convict Marietta Bosch, the South African woman with whom he used to share a cigarette, often a few minutes before pounding on her relentlessly in court. Bosch was ultimately convicted of the murder of her friend, Ria Wolmarans, and sentenced to death in 2001, becoming the first white woman to be executed and the fourth woman to be hanged in independent Botswana.

The thorough-going jurist has since retired his cigarette after solid 38 years of smoking but wonders if he will survive the challenges of his chosen career in its absence. “My cigarette was the talisman,” Mack says with something of a wry smile. “Sometimes when the pressure mounted, I would leave the courtroom alone to go and converse with it and solutions would just filter in as I puffed away.”

Another notable murder case prosecuted by Mack involved Tekoetsile Tsiane and two others who had murdered a farmer in Kweneng. As usual, the Masunga-born lad was in his element, uncovering every hidden detail to retire the trio to the dusty execution prison graves.

He enlists few names of suspects that he shared a strong bond with during his days as state counsel before revealing that he used to buy some of them lunch when they complained of hunger because he hated prosecuting a hungry man.

Despite leading very sensitive cases which might attract insecurity to oneself, Mack says he leads a free life full of joy because he knows he is just practising his profession and is not after anyone. He wants to live the rest of his life to the fullest in the company of those with whom he feels comfortable. “But I am still available to serve. Very much available,” he says as he prepares his papers on the P100 billion case about which he is adamant is headed straight to where other recent cases have gone. 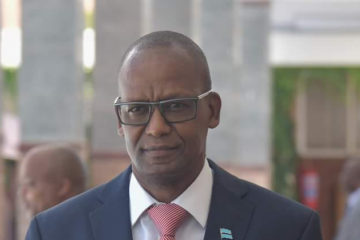