To the devout of ZCC, their denomination is an all-embracing institution where the sick find healing, the spiritually enervated receive succour and victims of the occult are cleansed and restored. The ZCC, which blends African traditional beliefs with Christianity, emphasises the restorative power of faith.

It is not known whether the church will embrace IT for greater reach with-out congregating under one roof.

Despite their growing restiveness, adherents of ZCC hold Bishop Lekganyane in inestimable reverence and will not question his silence regarding worshiping and fellowshipping in numbers easily because they believe he communes with God. According to an adherent who preferred anonymity, they will bide their time by having back-yard prayers with priests who are always ready to shepherd members of the flock.

ZCC is the largest independent African de-nomination ever founded in southern Africa and boasts at least five million members. Established on a farm now called Zion City Moria in South Africa’s Limpopo Province, it was officially recognised in 1948. ZCC is today led by descendants of its founder Engenas in two groups, the original one led by Bishop BE Ramarumo Lekganyane and a splinter group led by Joseph Lekganyane. The former has the emblem of a five-pointed star and the latter of a dove, but the liturgy is more or less the same.

In May this year, Bishop Lekganyane (of the star) announced in a statement that congregating for worship and fellowship would not resume until further notice. The statement said it was not yet safe to resume ZCC services. 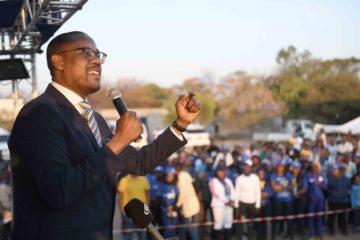