The purpose of this write up is to

elucidate the political dilemmas and choices associated with the economic trade-offs espoused in the 2017/ 18 budget speech and to show the inherent contradictions and the strategic predicaments between both the budget proposal and the NDP 11 theme.

Given the declining capacity of the BDP State to generate employment, it has adopted the neoliberal interpretation of employment creation by way of facilitating the private sector as labour market determination. In presenting the 2017/ 18 budget speech, Minister Kenneth Matambo elucidated that “the principal role of the Government is not to create jobs directly, but to provide a conducive macroeconomic environment to facilitate the development of the private sector and that the private sector, in turn, is expected to take advantage of such an environment to undertake investments, which would contribute to the growth of the economy and creation of sustainable employment opportunities.” This neoliberal model which rests on the free operation of markets draws its support primarily from the IMF and the World Bank Group labor-market positions. Its associated outcome has been employment growth and budgetary restraint accompanied by increasing levels of inequality.

The benefits of an improved private service employment performance must be weighed against the costs incurred. Existence of this trade-off presents the BDP government with shifting reforms toward marketization of every human activity. The model, while promoting job creation and low taxation, will perpetuate poverty and lifestyle decay by trapping large numbers of people in insecure and poorly paid jobs. Investing in the private sector will simply exacerbate class distinctions between rich and the poor, more so that neoliberal solutions by character impose the costs of a rising private service economy on people who cannot afford even modest health care insurance or quality education for their children; consequently, such solutions perpetuate class divisions.

The interpretation of social security policy by BDP as primarily being to facilitate private sector to create employment opportunities is too simplistic. It is for a fact that budgetary restraint precludes any rapid expansion of public sector employment, and governments wedded to such discipline must either accept low earnings equality in order to spur growth in private service employment or face low growth in overall employment. The BDP democratic reforms, by their very emphasis on delegated associational market liberalization, acknowledge their failure to provide adequate employment opportunities for all who want to work and thereby breeding labormarket exclusion. In essence, the downside of the model is its relative incapacity to generate well paid jobs for all who are willing to work, thus producing problems of long-term unemployment and labor-market exclusion.

The widespread privatization of public services, largely justified as an effort to achieve economic diversification, will contribute to increasing wage flexibility and the incidence of low-paid employment because the distribution of earnings in the private service employment is made highly inegalitarian, while simultaneously targeting to achieve high overall employment performance. By seeking to transfer large numbers of workers from the public services sector to the private services sector, the BDP government abandons its commitment to employment creation. The reforms purported by BDP government will also result into the weakening of the trade union movement with cutbacks in workers’ rights as the balance of bargaining power will be firmly tipped in favor of the employer.

Rights to employment protection and maternity leave, as well as protection against unfair dismissal and redundancy, for example, are by contrast not a priority in the private sector. The aim is to reduce the power of unionism and to attack its militancy. Such is the main cost of pursuing a neoliberal strategy. While the BDP leadership admits that Botswana is faced with challenges including persistent poverty, unemployment, and low employment, ironically, they continue to place less emphasis on the actual goal of reducing unemployment and more emphasis on shoring up economic competitiveness and minimizing costs in the economy. Not surprisingly the BDP has substituted its political obligation to create employment and has associated itself with policies which potentially discourage labor market entry. As usual the BDP social democratic welfare state regime has placed more emphasis on simple market dynamics and cost containment and offering a safety net that cannot even preserve a person’s living standard who is unemployed. The goal of employment creation and income equality has consistently been assigned a lower priority than those of budgetary constraint. The 2017/18 budget speech has in general failed to address the problems of unemployment, poverty, and income inequality, yet the scar effects of the chronic unemployment are so serious that the deviations from addressing them are bound to exacerbate the accumulating deterioration in economic status of the unemployed as well as capacity to recover from their career interruptions.

If unemployment, income inequality and poverty are a priority challenges to be tackled, a different application of the power resources perspective whereby fiscal policy is associated with labor market activation, through expansion of active labor market programs should be promoted. As a party, which now purports to cherish social democracy, the BDP core strategy first and foremost should be expansion of state involvement in the active labour market programs, rather than its narrower focus in the passive programs of social protection. The BDP affiliation to social democratic policy necessitates that they shift from defensive income distribution in social security to proactive income regaining in the labour market because the correct inference for social democratic activism should be a smaller social security system and a bigger state presence in the labour market. Social democracy being a concept which is defined as “politics against markets” necessitates that the BDP state should protect and not privatize parastatals as the goal of privatization is of no essence interest to the broader needs of people but that of making profits.

If the BDP truly believes in NDP 11, whose theme is “Inclusive Growth for Realisation of Employment Creation and Poverty Eradication”,they must then see the state as a necessary tool to achieve the goals of such a theme. A true desire to achieve the NDP 11 theme should be guided by a model of strong egalitarian ethos with a work ethic that emphasizes full-employment objectives as the root of collective identity and pride. The priority of the government should be to decrease the number of the worst off, and for this purpose the focus of policy reform should turn to the activation of those not employed, underemployed and underpaid. This requires deliberate sheltering from the inegalitarian effects of the market through an expansion in public services and employment.

Botswana requires an economy that could steer society in a direction that is deemed to be more equitable. The government has to make innovations to constitute a policy package focused on the creation of good paying jobs for the unemployed, underemployed and underpaid. It is so foolhardy that Botswana should be having unemployment considering that the country is endowed with ample natural resources which could be used to create industrial jobs in the form of block and powdered soaps, deodorants, beauty products, paper, leather clothing, bio-petrol, copper utensils etc. Considering that there is urgent need to improve the poverty condition of the worst off i.e. those with no source of incomeat all (e.g. the disability, unemployed) the BDP state could intervene by committing decent living – wage grants. Income inequality should be addressed by protecting those at the bottom of the earning scale with excessively low wages within the workplace, by increasing their salaries that meet a decent standard of living so as to have sufficiently strong impact on the earnings structure such that it is informative to treat earnings equality as an instrumental variable for all employers.

Adequate resources in training and education for the purpose of re-qualification should be provided as a result of job security reforms, so that those unemployed can have the future potential to access the labour market. The importance of social insurance for investment in especially asset-specific high skills tailored to national priorities such as engineering in mining, electrics, electronics, civil, ICT and frugal innovation should be the central theme of human capital development in NDP 11. This will correct the scandalous and preposterous condition Botswana finds itself in; after half a century of independence under BDP Botswana has failed to attain the bare minimum human resource requisite for effective electrical engineering supervision during the construction of a power station like Morupule B. After half a century of self-rule, we are told that we don’t have the expertise as a country to continue with the BCL copper mine prospect. The ruling class deserves to be looked with a scorn and despicable shamefulness for sticking Botswana in such a backward development stage! 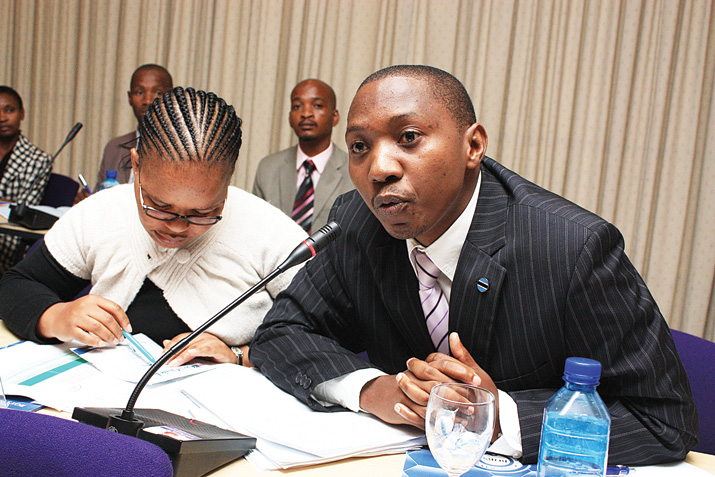