A question therefore arises, if, in our context, the recent beatings by certain members of the unemployment movement and the force used by the police would have been reasonable and or necessary to effect the arrest or protect the life of the police officer.

The lack of organisational accountability for the police in Botswana is an anachronism which was recognised by parliament when it adopted the Modubule motion for a Police Ombudsman. Regrettably, there has been very little movement, if any, towards its implementation. On a continuous basis, the citizens on uniform continue to wield a battery of powers unavailable to ordinary citizens.
Any and every power that the police have or may have must be based on a law, however sensible or meritorious a police action may be, if it is not justified by some specific law it is an abuse of power which the citizen is entitled to resist, by force if necessary, or by suing the police for compensation.
In the case of Rice v Connolly, police officers patrolling at night in a burglary prone area saw Mr. Rice loitering in the shadows. On being questioned and when he gave seemingly doubtful information they took him to the police station. He refused to answer further questions and was arrested for obstructing the police in the execution of their duties. The court held that the police had no power to insist upon answers to their questions or detaining Rice while they checked upon him. The court expressed itself as follows, ‘It seems to me quite clear that though every citizen has a moral duty or if you like, a social duty to assist the police, there is no legal duty to that effect, and indeed the whole basis of the common law is the right of the individual to refuse to answer questions put to him by persons in authority and to refuse to accompany those in authority to any particular place; short of course, of arrest.’
The main concern always is the manner of arrest and the use of reasonable force in effecting the arrest. The law requires that in effecting arrest, a police officer may use such force as is reasonable in the circumstances. It follows that unreasonable force will make the arrest unlawful and the victim entitled for damages for assault. Thus any show or use of force should be minimum and consistent with protection of the arresting officers in the circumstances.
A question therefore arises, if, in our context, the recent beatings by certain members of the unemployment movement and the force used by the police would have been reasonable and or necessary to effect the arrest or protect the life of the police officer. These questions are always difficult to answer but must be considered in light of the particular facts of each case. It is for the police officer to justify the use of force in the first place and whether its use was not more than necessary to either effect the arrest or protect his/her life.
It seems common cause that on that fateful Monday when the unemployed youth were assaulted they were not riotous, nor were they armed let alone resist the arrest. In fact on many of the videos posted on social media, when they were being assaulted many of them were just standing there and others of full flight. There seems to have been no attempt to arrest them or handcuff them and they resisted or that the force was intended to counter any force on their part. These youths had not riotously assembled together.
The main point not being addressed is why the police were armed in the first place when attending to the youth. A Botswana bobby, with sjamboks and such other hard objects, is not a reassuring figure. There can now never be a pretence that the police go about their duties unarmed. It is rather surprising, if not ironic that we seem not to debate the regulation the way in which these weapons are being used.

Urban Soul to host the first ever Sneaker Expo Botswana 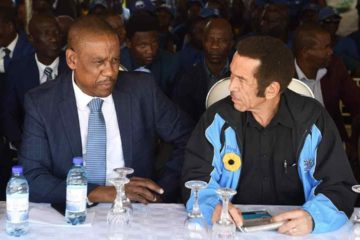