“When the madness of an entire nation disturbs a solitary mind, it is not enough to say the man is mad.”

Greetings friends. I am sad today. This morning I found myself Inadvertently, reflecting on the current situation in our beloved country: the desperate cries for help that seem to be falling on deaf ears, the arrests and the rather absurd, declarations and pronouncements on the mental well being or lack thereof, of the aggrieved. As my mind wrestled with these contradictions of our times, the powerfully evocative storyline of the late, great Kenyan playwright Prof Francis Imbuga’s ‘Betrayal in the City’ came to mind.

Vividly capturing and depicting the disappointment that came with Independence and the so called emancipation in post-colonial Africa, the writer aptly posits : “When the madness of an entire nation disturbs a solitary mind, it is not enough to say the man is mad.”

The literary master piece resonates with the current affairs in our country where the capitalistic state is rearing its ugly head and manifesting in unprecedented economic hardships marked by unparalleled disinterest from the government. Apologists of the system, like Mulili, a character in the text( an illiterate army man who gets a position he doesn’t qualify for because the president is his uncle), will of course rubbish everything and vilify those who dare speak up. Speak out and speak up we shall: What is the plan to rescue the suffering multitudes of our people? The President correctly says ‘it is not just the creatives who are suffering from the effects of Corona’ but offers no solution. Is it enough to simply acknowledge the problem and that it is having a debilitating effect on more than one segment of our society? With the billions that have poured into the fight against Covid19, have we seen an improved health system? Other countries have new hospitals built during this crisis. Do we have any?

Sad sad state of affairs. I dare say, that the half hearted and often disjointed policy pronouncements supposedly geared towards assisted our people are nothing but tokenism, at best deception. In any case all these belated efforts are akin to closing the stable door after the horse has bolted. The damage is done.

God have mercy on us. We, the people, are indeed on our own. Hold on tight. Look out for each other and assist one another during this bumpy ride.

A MESSAGE TO ALL HOLLARD BOTSWANA STAKEHOLDERS 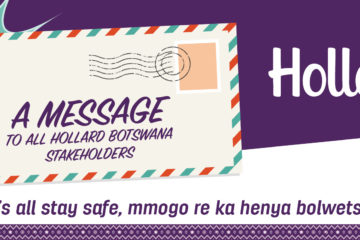