The Miseducation of Ian Khama

Tabula rasa. The earliest comparison of the mind to a blank writing tablet occurs in Aristotle’s De anima. A new and revolutionary emphasis on the tabula rasa occurred late in the 17th century, when the English empiricist John Locke, argued for the mind’s initial resemblance to “white paper, void of all characters,” with “all the materials of reason and knowledge” derived from experience. Locke conceived of the human mind as being at birth a tabula rasa, a blank slate on which experience wrote freely and boldly, creating the individual character according to the individual experience of the world. That is, what we see of Ian Khama, a reflection of many years of scribbling and inscription by society in the ‘blank slate’ that was him.

Accordingly, his interaction and interpretation of time, space and events, is an expression of accumulated ‘writings on the slate’ by the society. None of these writings has he eternalised, embraced and expressed most than those that speak to, affirm and confirm his, ‘exceptionality’ and ‘supremacy.’ Unfortunately, these value systems, were reinforced and perhaps ‘confirmed’ by unique socio-political reality of his upbringing. Firstly, he was born to a white mother, among a sea of black people. Secondly, his father was two-in-one; Paramount Chief of Bangwato and President of a newly-born republic. While navigating between identity-crisis and perhaps exaggerated expectations of being royalty, the lines between being human and ‘super-human’ were blurred. Fiction overruled fact. Ultimately, there was no distinction between man and myth.

Myths about the existence of ‘Ian Khama,’ whose aim is to achieve common good and obtain justice, who gives up his own interests for the sake of the ‘us,’ have long dominated public psyche. Stories of Ian Khama’s mystical and abracadabra abilities captured public imagination. Great stories about his gladiator bravado especially against troublesome Ian Smith’s Rhodesian forces dominated social narrative. Having been introduced and deeply rooted in the consciousness of both Khama and Batswana, the myths substituted reality. As a result, Ian Khama was lost to the world of myths and occult. Perhaps because, it is easier to live in terms of myths than truth and reality.

Myths answer the dreams and hopes of man’s being, whereas truth and reality command and compel rather than gratify man. Myths, which dominate the conceptual field of a person carrying out its secret motives, provide the sense of a person’s existence, determine key parameters of existence, ensure successful search for the “right” answers, are embodied in values, ideals, are fixed in norms and rituals. In other words, they become that part of his life which we usually leave unnoticed. They determine behavioural motives, interpersonal relations, relations between the state and the society, and between various social groups. They fix existing illusions or create new ones, they either preserve or ruin social and political links, give the feeling of righteousness.

When Khama quit military to join politics, his ‘mythic’ and ‘mystic’ abilities were once again evoked by the political elites. In the absence of a coherent ideological thesis in the BDP, a special type of near-spiritual activity of creation, dissemination and preservation of political illusions was deliberately orchestrated by the elites for self-preservation. Khama was propagated by the party as a hero and a Messiah. An image of a hero who understood people’s problems was constructed in the public psyche. The hero was therefore, going to quickly defeat any enemy of the people, radically change their existing situations and quickly solve all problems. Myths about Khama were employed as a manipulation instrument; a tool for purposeful influencing the public consciousness with the aim of forming the necessary images, evaluations, and attitudes.

In the absence of mystical powers to establish absolute power and control, Khama resorted to fear. This fear, functioned both as a defensive mechanism from public scrutiny and instrument of political control. This is because, wherever the myth of politics prevails, totalitarianism is a logical necessity. The forms of the total state may vary, but they will in every instance be similar in their inherent philosophy and theology. Attempts by Khama to ‘evoke’ the ‘mystic persona’ from ethnology and anthropology as in his frequent visits to Gcihaba caves have done little to produce desired end state.

In the current state of affairs, Khama is under pressure to defeat Masisi by all means, otherwise it risks debunking his myths and mystic powers and relegating him to mere mortal. Therefore, Khama’s warlord mentality must be understood in the context of a helpless victim of myths, mysticism and the occult. It is a tale of a human, who refuses to be human.

Mogorosi reacted to Zebras snub in the best possible way

Debunking the colonial myth of the “naked Bushman”

The Miseducation of Ian Khama 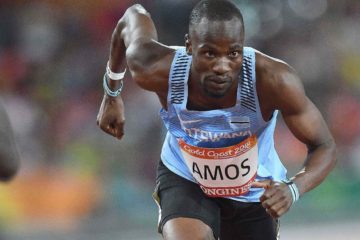