As FACEBOOK has provided a communication platform for political parties and their members, some individuals have risen to prominence through their use of this medium.  They have stirred controversies in defense of parties and in attack of opponents. Though some of them hold no official position in their parties, they have become the unofficial faces of their parties on Facebook.

Banks Ndebele BCP: 4992 followers. Incumbent councilor in Ledumadumane, Mogoditshane constituency. A regular contributor to newspapers through letters to the editor, Ndebele is a committed defender of BCP policies and actions  and he occasionally posts his activities. Since he took to social media, many editors are relieved that he is writing fewer letters.

Selwana Kesebonye BDP.  2449 followers. Of recent she appears to be breaking ranks with other BDP FB activists.  She criticized the BDP for their use of the Botswana Defence Force helicopter to travel to a rally in Ghanzi for the Maun attack of Kgosi Tawana Moremi much to the delight of opposition and bewilderment  of fellow BDP activists. Most of the posts are no longer on her wall.

Brigid Smith, BDP: 2096 friends. She confirmed that she was an administrator or at least has access to the inbox of President Khama’s Facebook page.
She is allegedly  responsible for the BDP’s biggest social media gaff by posting selfies of parting members  using BDF aircraft on the  campaign trail. She should have stuck to the BDP campaign catering and refreshments committee.

Tumy Modise BDP: 4975 friends. Another staunch BDP defender. Her resolute defence of the ruling party has lead to FB users calling her the next Dr. Jeff Ramsay. It is unclear whether she has an official role in the BDP. She recently broke ranks with most BDP supporters over the Maun incident.

MacDonald ‘Macdee’ Peloetletse BDP: 4999 friends and 4176 followers. Peloetletse is a member of the BDP Publicity and International Relations Committee. He is a ferocious defender of the BDP and will rebut anything that does not favour his party, usually with a fair bit of cutting and pasting from the web, peppered with a few bible verses. 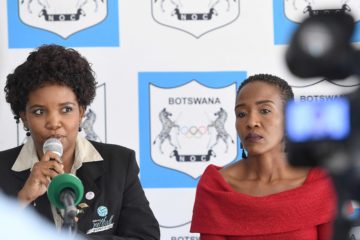