As the IAAF World Championships commence this Friday in Doha, Qatar, Nijel Amos will be on a quest to grab the illusive world title. Amos has not yet managed to record a podium finish at the World Championships owing to multiple reasons, notably injuries and bad form in key moments of the tournament.

This year Amos has been in the best form and physical shape of his career and he looks set to be a top contender in the World Championships, Amos still has the world 800m lead of (1:41.89) which he recorded in Monaco (in a Diamond League meet) this year.

Amos’ arch rival David Rudisha has been ruled out of the competition as he continues his road to recovery, with Rudisha out of the picture Brazier has emerged as the biggest threat to Amos’ world title hopes. Brazier and Amos faced each other three times this year in the Diamond League, Brazier has the superior head to head record, the American beat Amos in Rome and in Zurich while the Botswana star finished ahead of his American counterpart in Doha, Qatar in May.

The American athlete has grown in leaps and bounds in recent years, he has developed from a college protégé to a full fledged 800m contender and a Diamond League champion. With his lanky figure, Brazier uses his frame to run upright and with a powerful running technique.

He rarely shows any signs of tiredness and he is usually a strong finisher in the last 200m stage of an 800m race, a case in point was the Rome race in which he made a last second sprint to finish ahead of Amos.

He repeated the feat again in Zurich as Amos was 20m ahead of him in the final 200m stretch of the race, Brazier defied the odds by sprinting once again to glide past Amos who had looked set to finish first. Brazier also has a history of competing in 5000m cross country races and that might explain his endurance as well as his ability to store energy to make last ditch sprints, while others finish the race gasping for air Brazier breezes through like a seasoned athlete despite his young age (22).

Amos will have to adopt new ways of finishing races a lot stronger to match up with Brazier. The first round 800m heats will take place on Saturday from 4pm (CAT),

Botswana on the path of fallout from US-China trade war 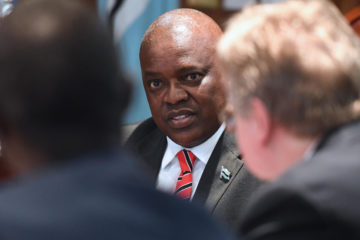