The current BTC Premiership top goal scoring charts do not make for good reading for local strikers. This has been a trend for the past four years as local marksmen have struggled to reach or surpass the 20 goal mark in the league, the last local striker to reach that mark was Kekaetswe Moloi in 2013 during his time at Mochudi Centre Chiefs.
Attacking midfielders and foreign strikers have taken over the scoring charts in the past four years. The likes of Lemponye Tshireletso (2015), Segolame Boy (2016), Patrick Kaunda (2014), Tendai Nyamadzawo (2016) have either won the award or been their clubs’ top scorers in the aforementioned period while out and out strikers have played second fiddle or been on dry spells.
There were spells where strikers such as Malepa Bolelang, Mpho Mabogo,  Bonolo Fraizer (during his Nico United days), Moloi, were dominating the scoring charts, the local strikers were regular net busters in their prime but the next generation of strikers have yet to reach the heights set by their predecessors.
In the 2014/2015 season Hendrick Moyo was the leading local striker with 14 goals as an Orapa United player, he finished the season a goal behind Tshireletso who won the top goal scorer award ahead of the striker.
Former Green Lovers striker Moatlhodi Ralesoata was on the path to carry on the baton but his 12 goal tally in the first half of the 2015/2016 season could only be improved by an additional single goal after a January switch to Gaborone United as he ended the season with 13 goals altogether. During the same season Jwaneng Galaxy’s Tebogo Sembowa
His disappointing goal return at GU resulted in a move to Extension Gunners where he has shown glimpses of his old form but he is yet to replicate the form that made him a staple in the Green Lovers team.
This season GU’s young striker Tumisang Orebonye has lit up the league and has been the only bright spark in the club’s turbulent league campaign. Orebonye has scored 15 goals in the league this season and is the new hope for local strikers as he has shown that he has all the attributes to be a leading striker in the BTC Premiership.
Attacking midfielders Thero Setsile and Thabang Sesinyi have also outperformed numerous local strikers this season after scoring 14 and 13 goals for Galaxy respectively this season. The 2016/2017 leading scorer is Township Rollers’ Zimbabwean striker Terrence Mandaza, his closest challenger is the already mentioned Orebonye.
Local strikers’ ‘dry spell’ has also seen the national team struggle to find a prolific goal getter to lead the line for Peter Butler’s side, none of the strikers selected at national level have enjoyed prolific spells, they have been lauded for their workaholic style of play but the  national side has struggled to find a free scoring goal poacher since the Jerome Ramatlhakwane era.

Condemn The Treatment Of Our Soldiers And Police Officers 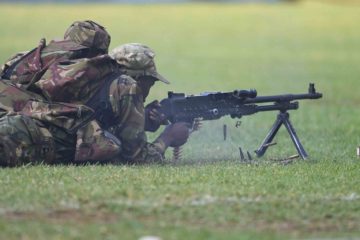