The second round of Botswana Karate Association (BOKA) national team selections reached fever pitch this past weekend as karatekas gathered much needed points on the table at the BOKA Hall. With just one round of selections left,the battle to make the final 18 man list intensified as experienced campaigners in Ofentse Bakwadi, Lame Hetanang and Oratile Caiphus all solidified their status in their respective bouts.
SSKB karate club prodigy Bakwadi got into the history books after winning the gold medal in the male individual Kata for a staggering 10 times in a row. The All Africa games bronze medalist was victorious in the final against Tlotlang Ponatshego making him the most decorated karateka in our local borders.
In other results under 21 junior prospect Thabang Setshego made up for his disappointing outing in the first round of selection by claiming the male under 60 kumite category. When the latter fights with a swagger and hunger like he did this past weekend,then it makes his capitulation at the hands of modest oppositions all the more difficult to stomach.
“I have been nursing the injury that I have for quite some time now, so I am yet to reach full fitness. Being part of the senior national team selections is about gaining experience because I weigh in the under 21s so if I happen to make the cut it will be just a bonus for me. Our coach always encourages us to fight with the seniors because in the next 2 years I will be a full time senior athlete,” Setshego told Gazette Sport.
Lemogang Kolopile meanwhile won gold in the male kumite under 60 category, whereas Caiphus and Mpho Basenakitso took gold in the under 67 & 75 bouts respectively. For the female categories Hetanang scooped gold in the female individual kata while in the kumite categories Tsholofelo Madumo took first position in ladies kumite under 68 and Otiliah Olopeng won gold in the over 68 category.
This publication is reliably informed that a points tally criteria will be used to select the final team unlike previous selections where a one day tournament was used to select the senior national team squad.
“Gold medal winners will receive 60 points, silver gets 25 points, bronze 10 points and then there is a registration appearance which ranks in at 40 points. So far the selection are going according to plan, the competition is good and this past weekend we manage to finish on time. After the final round of selections,the 18 karatekas will be split in to 5 categories for male and females, two individual kata participants for male & females and a three team kata team for both genders,” BOKA Vice President Technical Mpho Bakwadi told this reporter.
Meanwhile the third and last round of selections will be hosted at Jwaneng in a fortnight.

Clash of the heavyweights at GIM 2017 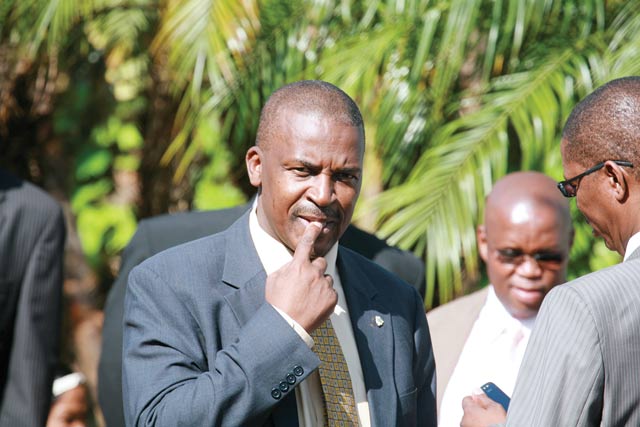