Women’s 400m sensation Christine Botlogetswe has become the fourth local athlete to qualify for the Doha 2019 International Association of Athletics Federation (IAAF) World Championships and the second athlete to hit qualification standards for the Tokyo 2020 Olympics.

This became possible after her impressive performance at the IAAF Diamond League which was staged in Shanghai, China this past weekend. According to the entry standards uploaded in the IAAF website, the qualification time for the women’s 400m category for the Doha World Championships is 51. 80. The website further stipulates that the qualification standard for the women’s 400m category for the Tokyo 2020 Olympics is 51.35 as approved by the IAAF Council in March 2019 in Doha; the qualification period for track and field events commenced on the May 1 2019.

Botlogetswe who began the race in lane nine in Shanghai, had to dig deep in the last 120 metres to attain third position with a seasonal best (SB) time of 51.29 finishing before renowned athletes like Stephenie Ann McPherson (Jamaica) and Jessica Beard (USA).

Her time of 51.29 also confirmed her as the fourth local athlete to qualify for the Doha World Championships after Baboloki Thebe, Nijel Amos and Galefele Moroko. The 23 year old athlete is also the second athlete to qualify for the Tokyo 2020 Olympics after Amos who did so earlier this month during the Doha held Diamond League meet where he clocked 1:44.29 to beat the qualification time of 1:45.20.

“I am delighted with my performance, it really shows that I am working hard each and every day, I am looking forward to clocking a better time in the next race,” said Botlogetswe in a brief interview with Gazette Sport from Shanghai.

His coach Justice Dipeba also shared his delight on Botlogetswe’s performance, “ she did very well because she followed the race plan. She is making good progress, our plan was for her to hit the qualifying standards soon and that she has achieved that, I am very happy, our focus will now be on the next races and the World Championships.”

Botlogetswe is currently ranked third in the Diamond League final qualification table with six points. This is after the Diamond League adopted a championship-style model in 2017 whereby athletes earn points at the meetings to qualify for the two finals. Each of the disciplines is staged six or four times before the final were qualified athletes will compete for a grand prize of 50 000 USD and a diamond trophy

It was the Rakops born lass’s second career appearance in the Diamond League, she made her maiden run last year at the Lausanne Switzerland meet were she finished seventh in the ladies 400m with 51.37. This is the athlete who has had a fairy tale run last season finishing it with a personal best of 50.89 which was a great improvement of 51.82 that she commenced the 2018 season with.

Meanwhile another local athlete in Isaac Makwala who competed in the men’s 400m race in Shanghai pulled out of the race with what seemed to be a hamstring injury. The Tutume born athlete was trying to make a come back to the the Diamond League after he after he limped out of the 200m race during the Eugene Diamond League which was held on May 26 2018.

“It is nothing serious, I think I will be back on the track soon,” said Makwala in a interview with Gazette Sport. “ I will however have more information on the injury after doing the tests.”

BTO to privatize Heart of the City Carnival 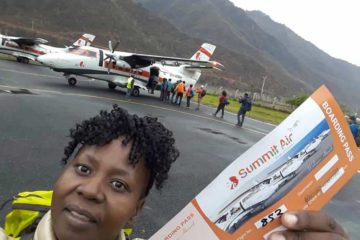