Diamond Mining Company Debswana in conjunction with the Botswana Chess Federation will host the annual Botswana International Open Chess Championships this independence holidays in Gaborone. The tournament which is the biggest event in the local chess calendar, is also one of the most anticipated in the SADC region, with over 150 players expected annually from across the region.
The event has over the years been hailed for presenting an opportunity for younger players to test their strength against Africa’s toughest players. This year’s competition is schedule to take place from 29th Sept-2nd October at the new Botho University Hall in Gaborone, revealed a statement from the federation.
“Botswana Chess Federation has the honor of hosting Botswana International Open Chess Championships. The event is schedule to take place over the independence holidays from 29th Sept 2015-2nd October 2016 at the new Botho University Hall in Gaborone,” read the statement.
The federation also revealed that invitations to the tournament have already been distributed to several neighboring nations, South Africa, Zimbabwe and Zambia.
“Botswana International Open is renowned for bringing together the best chess players from across Southern Africa. Botswana Chess Federation has extended invitations to other reputable players from around Africa and have so far received registrations from the hosts Botswana, Zambia, Zimbabwe and South Africa,” added the communique.
“Botswana International Open (Debswana Open) is one of the most anticipated events in the Botswana chess calendar and is the only major chess event in Botswana where we see many players from the SADC region competing fiercely for the coveted prize. Botswana Chess Federation has successfully held this annual tournament over a number of years.
We have been supported profoundly by Debswana Diamond Company through sponsorship and this has gone a long way in enhancing the reputation of the event and making it the biggest chess event in the Botswana Chess Federation Calendar,” ended the statement.
Zambian’s male International Master Chitumbo Mwali has been tipped to continue his dominance in this event in the male section, after holding the title since 2014. Botswana’s Women International Master (WIM) Boikhutso Modongo will also be hoping to retain her title after taking over from her national teammate Onkemetse Francis who won the event in 2014.

UDC in dilemma to accept Khama as a ‘comrade’ 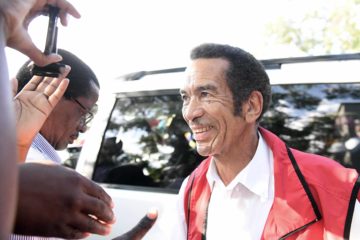