Club said to be having a new silent investor

Mochudi Centre Chiefs management have revealed that they are still in the search for  new sponsors. The Kgatleng giants’ financial coffers reached rock bottom just before the start of the 2016/17 season, after the team’s investors, the Jamali family pulled out due to reported complaints of other shareholders not playing their part in assisting the team financially.
Soon after, premium sponsor Lemepe and Bank of Baroda left the club, leaving the side to solemnly rely on  Huawei for sponsorship. This saw the club struggle in paying players on time, and fail to secure quality signings in the last transfer window.
However, news reaching Gazette Sport have divulged that things are ‘looking up,’  with a silent investor said to be financing the club. “Things have returned to normal. It didn’t take long for the situation to calm down (after the Jamalis). Players have, for the past two months, been paid on time, and everyone is looking happy again,” said a source close to the club.
The informer further revealed that the management remained mum on making the investor’s name public. “It is still a big secret, everyone is tight-lipped as to who is the new guy behind the scenes. Apparently, he doesn’t want to be known as yet. He is the reason why the team is now training at Lekidi,” added the source.
“They have been recently been linked with a new Spanish coach, and I guess that really shows how the club has recovered financially,” he ended.
Reached for comment, the club’s chairman Ernest Molome said the club is still in the search for a new financier. “We are still searching around. We have been negotiating with a few companies, but there hasn’t been anything as yet,” Molome told this publication.
He further said, “We have had people who have promised us something, but the problem is that many companies’ financial year is coming to an end at this time of the year, and it makes it difficult for them to commit. But we believe soon we will be having something,” added the Chairman.
Quizzed on the club’s new technical sponsor (95 Plus), which they recently started donning after ditching local kit manufacturers Dlala late last month, he referred Gazette Sport enquiries to the club’s Public Relations Officer Clifford Mogomotsi whose mobile number was out of reach at the time of going to press.
Molome’s sentiments come just a week after their traditional rivals Township Rollers unveiled their new premium sponsors, Stanbic Bank. The sponsorship is at the tune of P3.6 million for three seasons. 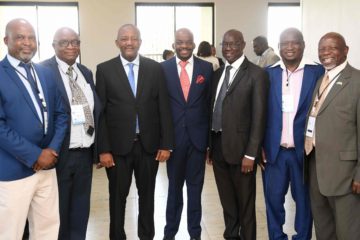