ochudi Centre Chiefs are on the cusp of retiring club legend Pontsho Moloi’s number seven jersey as a token of appreciation for his service to the Kgatleng outfit. The idea was initially conceived by the club’s supporters who felt the tribute would be fitting after Moloi ended his playing career at the end of last season.

The club’s executive committee is currently holding talks about the proposed gesture and they are expected to make an official announcement soon. Speaking to Gazette Sport, Chiefs’ management representative Clifford Mogomotsi confirmed that they are considering honouring Moloi by retiring his jersey number.

“It is true that we are considering honouring Pontsho Moloi with a jersey retirement but we are yet to make a collective decision. Discussions are still ongoing, the executive committee has to make a final decision. The fans and the club would like to see him honoured in this way. The plan is to reward him for his loyalty and his great service, so many clubs do it as a tribute to players who left a long time ago but we want to show our gratitude a lot quicker,” explained Mogomotsi.

Moloi joined Chiefs in 2007 from Notwane and went on to play for the club for nine years. A loan spell at Bay United in 2009 saw him leave the Kgatleng giants for a season, he returned the following year and played his last game for the club at the end of the 2015/2016 season.

The retired forward won four league titles with Chiefs and the 2008 Coca Cola Cup, he was also a part of the historic Chiefs side which went unbeaten in the 2007/2008 season. Since retiring, the veteran has been helping the club as a member of the technical team this season. Pontsho was also a part of the Zebras squad that made their maiden appearance at the 2012 AFCON tournament in Gabon and Equatorial Guinea. 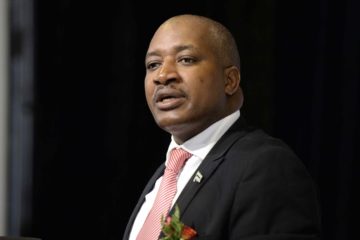