The National Stadium track will be on fire this Saturday as top local and international athletes will be battling it out in the Gaborone International Meet (GIM).

Formerly known as Sports View International Meet, the athletics show-piece which has been taking place for the past seven years,  was re branded in 2017 to allow for different stakeholders to take part in the event. It is the brainchild of former 800m athlete Glody Dube and it is aimed at creating a platform for both up and coming and elite athletes to showcase their talent against top international athletes.

Just like in the previous years, this year’s edition of the GIM has managed to attract international with athletes from Ethiopia, Somalia, South Africa just to mention but a few having confirmed their presence for the race. Immense battles are anticipated in the 200m race as it will pit Zambia’s race national record holder ( 20.18) Sydney Siame with Botswana’s 200m sensation Karabo Mothibi who was the country’s only short race runner at the 2018 Commonwealth Games, he holds a personal best (PB) of 20.66 in the race.

Another race to look for is the men’s 400m which will put together the Gold Coast 2018 Commonwealth Games champion Isaac Makwala with Botswana’s former 400m junior champion Leungo Scotch.

The ladies races are also expected to put spectators on edges of their seats more especially the 400m race; Christine Botlogetswe who will enter the race as Botswana’s fastest (50.89) on the day, will be up against Galefele Moroko who holds a PB of 51.63 and Goitseone Seleka who will enter the race with a PB of 53.11. The ladies 200m race is also expected to entice athletics enthusiasts with fierce battles expected between the former 200m national champion Leungo Matlhaku (23.25), Tsaone Sebele (23.79) and South African athletes who have over the years gave the two tough competitions during the meet.

Long distance races fanatics will also be treated to a feast of their own, as lifetime rivals in Sesebo Matlapaneng, Rapula Diphoko (Botswana’s representatives at the 2019 World Cross Country Championships) and Sylvester Koko will be tussling up with athletes from Lesotho, Ethiopia, Somalia, Kenya; the countries are well known for long distance races.

Speaking in an interview with Gazette Sport, the race founder Glody Dube said they expect this year’s meet to be much competitive as compared to the previous ones. “That is because this year we have managed to attract athletes from as far as Somalia and Eritrea with the hope that they will give the locals the run for the money,” he said.

Dube who finished eighth in the 800m race final during the 2002 Commonwealth Games went on to highlight that they are happy with the growth of the race. “ Even this year’s prize monies can tell that we are growing and the IAAF is even to take us seriously,” he noted.

The race has been broken into three categories being premium, classic and promotional for both genders. Position one in the premium race will be awarded 1100 USD, position two will walk away with 900 USD whereas the third place finisher will walk home with 500 USD. In the classic race, the winner will pocket 900 USD, second place finisher will take home 500 USD whereas the one in the third position will walk away with 400 USD. Prize monies in the promotional race are as following; first position (500 USD), second position 300 USD and 200 USD for third position.

Tickets for the race sell at P 50 across board and VIP sells at P 250.

CONFUSION OVER OTHER TOP LOCAL ATHLETES AT THE RACE

There has been confusion over the previous weeks as it was reported that the Botswana Athletics Association (BAA) has since decided to send a five men team of Baboloki Thebe, Onkabetse Nkobolo, Boitumelo Masilo, Nigel Amos and Leaname Maotoanong to the Penn Relays that runs a same period as the GIM (from April 25 to the 27th). However Gazette Sport has gathered that some of the selected athletes have decided to skip the Penn Relays for GIM, a situation that Dube is unaware of.

“As far as we know we have not heard anything formal that informs us that they are not going to the Penn Relays, they have also not confirmed their presence for the race. What happened is that we went to companies to seek for appearance fees for top local athletes that are going to be available during the race, we worked on the list that we have so if they come to our race then it means we will not be able to give them appearance fees,” he said.

“Even Nigel Amos contacted us last week Wednesday requesting us to buy him a ticket for the race, we told him that there’s no way we could help as time has already elapsed, if he comes then he will just compete like any other athletes.” 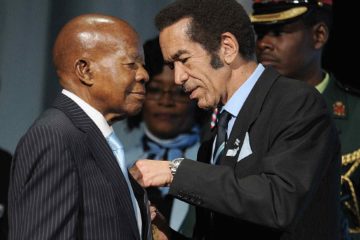