Even by their own incredible standards, BTC Premiership rookies Black Forest supporters have brought an intense affinity of a ‘twelve man’ rank to their first round heroics.
Although certain clubs, can lay a claim that they have the best supporters around, a few can match the daring Magoleng supporters. Throw in the imposing Extension Gunners patrons, the blue and yellow Township Rollers fans swagger, the humility of the royal Mochudi Center Chiefs fans, Forest fans bring in lumps to the back of throats whenever on show.
On a night of extreme emotions and nervousness in Raizor Tsatsilebe’s camp against Rollers on October 14th, the brave Mankgodi people filled the south stands of the National stadium roaring to ear splitting songs. By then quick first half goals from joint Premiership leading scorer Lynoth Chikuhwa and Thatayaone Kgamanyane almost busted Popa’s bubble but Mark Harrison side salvaged a point in the tie.
All this, Forest supporters boomed on stands with green gowns, and face paintings to stamp their mark on the football top tier.
Fast forward two months, Tsatsilebe’s side has tore the endless list of top teams in the Premiership with the size of BDF XL,Mochudi Center Chiefs coupled with draws against Orapa United and Mapalastina.
“We are still newcomers and I am still happy because we are going in the festive break on Top 5 positions which is a good record for my team.We haven’t lost a game.If we play teams like Miscelleneous which are senior teams compared to us and you see them celebrating a draw against us it means we are a tough team”,Tsatsilebe told Gazette Sport.
The incredible loyalty, humour and humility of the Forest supporters is well documented, especially the way they dealt with plumbing challenges last year in the Debswana First Division South. Even prior to the Forest resurgence under former coach Murphy Maseko, when football in Mankgodi side was often from spectacular,the club was regularly pulling in stadium audience to full capacity. These days,under Tsatsilebe’s dynamics and young troops they rarely play to anything much less than a capacity crowd on home turf in Molepolole sports complex.
“Most people don’t know that despite the large numbers of people that throng the stadiums when we play there are others that are left at home
people started noticing us in our home games because of the incredible support Mankgodi people gave us. I wonder how it would be if we had a stadium in Mankgodi because we are people who love our team,” one Forest supporter told this publication.
With all that in mind, lies expectation of perhaps challenging for the league title in their maiden appearance in the Premiership. Once on the books of Magosi, club leading goalscorer Chikuhwa however has revealed the team main ambition is to finish on the top half of the league.
“Our focus is to finish in the top 8 and maybe if the top teams drop points we would get in to the top four. We are not expecting much on the league but this is football you will never know,” Chikuhwa told this reporter.
Make no mistake, despite Chikuhwa being coy of ambitions of challenging for the Premiership title the aura of underdogs tag seems to have rubbed good results on Forest. Magoleng supporters are very loud,they love flares and they love giant banners too. In the 0-0 draw against Miscellenous this past weekend one read ‘we are here to stay,’ a sign that they created an intimidating mark to the counterparts.
In world football, the best atmosphere can form part of a club’s success and popularity,and Magoleng supporters have undoubtedly added a mythology to Forest unrivalled form. 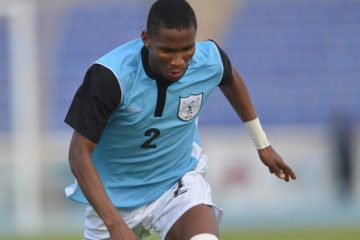