In a strange turn of events, Black Leopards have decided to sideline Zebras forward Mogakolodi Ngele since the ABSA Premiership restarted in the Gauteng bio bubble. The club’s decision to avoid using Ngele in all of their games so far is strange given that the club requested special permission from FIFA and the South African Football Association (SAFA) to extend his contract to enable him to participate in the last games of the 2019/2020 season.

Ngele’s initial deal expired in June but the club signed a new short term extension with the player. Before the league resumed Ngele’s head coach Alan Clark resigned and he was replaced by Morgan Shivambu a week before the restart (early August).

Ngele enjoyed his best run of games under Clark, the coach played him in four consecutive starting line ups in the league between February and March in games against Stellenbosch FC, Orlando Pirates, Polokwane City and Baroka FC.

This was the first time in Ngele had started four successive games in his Leopards stint, the coach was also instrumental in convincing Ngele to sign a temporary extension when his initial deal expired. Ngele has not played a league game for the club since March 7 when Leopards lost 2-0 against Baroka FC.

Since Shivambu took over, Ngele has not been named in three consecutive match day squads, during this spell the club has managed to record two wins that have propelled them to 13th place (one place above the relegation zone). Before the league restarted Leopards were rock bottom of the ABSA Premiership standings but the upturn in their form has seen them gain confidence of surviving relegation.

The club has also not released any statement about whether or not the player is injured, his absence from all match day squads suggests that all may not be well for the player as the arrival of a new coach often leads to other players being sidelined. 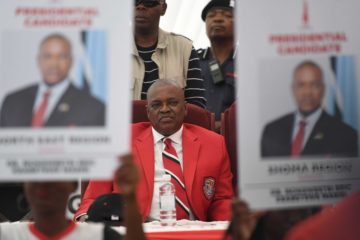