“The winner today is not me, the true winner today is football,” newly elected Botswana Football Association (BFA) president MaClean Letshwiti stated during his coronation. The acclaimed businessman eclipsed Tebogo Sebego and Solomon Mantswe in the BFA Presidential Elections over the weekend to usher in a new era for local football.
To some, Letshwiti is a novice to the presidential seat but to many he represents a fresh ray of hope in a bid to “restore integrity to football” as he has alluded during his presidential campaign.
Creating strategic partnerships, making football an industry, making football development a priority, empowering women’s football, supporting regional structures are some of the promises made by the new BFA leader in his bid to revolutionise the game.
During his first presidential launch he stated the following, “I cannot promise a rosey picture, it will be a bumpy road.” To optimists and his followers he is the saviour of local football while to realists he offers a modest approach to address the plight of Botswana football.
Letshwiti has played a major but behind the scenes role in the history of Botswana football; as a financer for multiple league winners Mochudi Centre Chiefs, he also played a role in Township Rollers’ return to the elite league in 2004 with monetary assistance.
His greatest contribution came in the form of recruiting Serbian coach Jelusic Veselin to Botswana as the Chiefs coach, the Serb later coached the national team and many believe that he set the blueprint for the Zebras to reach better heights years after his departure.
Letshwiti won the BFA presidency by a four vote margin, he garnered 32 votes against Sebego’s 28 in a second round run off. In the first round of voting Letshwiti obtained the highest number of votes, 28, Sebego got 24 while Mantswe received six votes.
As a result, a final run-off was required because Letshwiti had not garnered 70 percent of the votes to become the outright winner. Letshwiti’s victory was further sweetened by the fact that his running mates Segolame Ramotlhwa and Marshlow Motlogelwa won the first and second vice president positions. Senki Sesinyi (ordinary member) and Eatametse Olopeng (ordinary member) rounded off an impressive haul for Team Letshwiti.
After more than 20 years as a football administrator, a key stakeholder and a football fan, one of Botswana’s most revered businessmen has elevated to the upper echelon of the local game for the next four years. 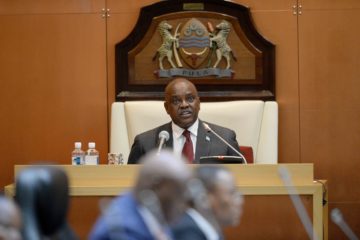