The CEO of the Botswana Stock Exchange (BSE), Thapelo Tsheole, has described Botswana Telecommunications Corporation (BTC) as leading company that has paved the way for others in the in industry and enhanced synergies across the economy.

Speaking during the Opening Bell Ceremony that BTC used to commemorate and celebrate the telco’s 40th anniversary recently, Tsheole observed: “BTCL is one of the many success stories that we have witnessed in recent years at the BSE. BTC is the first State Owned Entity (SOE) to privatize and list on the national stock exchange.”
“Their listing has induced conversation with the government to pave the way for other SOEs to utilize the BSE as a capital-raising platform and promote citizen economic empowerment by listing on the local bourse. The listing of BTCL brought forth diversification in terms of sectoral representation as they are the first ICT-focused company to list on the BSE.”

BTC’s listing on the BSE led to one of the country’s largest and most historic IPOs due to investor appetite that has snapped up more than 400 000 shares since 2016 when the telco listed.

Tsheole noted that the BTC IPO became over-subscribed by 1.68 times when the public demanded 776 333 400 shares, well over the 462 000 000 on offer. “This has been ranked as an incredible achievement for any BSE listed entity to-date,” he said. “BTC and BSE have over the years nurtured a purposeful and productive partnership. As we congratulate the BTCL board, management and their staff for their successful journey in marking 40 years of operations in Botswana, we must remember that it is not an easy feat but a tremendous milestone brought forth by commitment and resilience and great service to Batswana.”

He singled out education, sports and the creative industry benefiting from synergies added by BTC.

Also speaking at the ceremony, the Managing Director of BTC, Anthony Masunga, said listing had strengthened the telco’s resolve to improve its services to customers while delivering shareholder value. “So far, we have managed to deliver the highest yield on the local exchange, thereby creating wealth for our shareholders,” Masunga noted. “As we celebrate the fourth decade anniversary, we would like to commend the BSE for providing an opportunity to local enterprises who seek growth and maturity through public funds.” 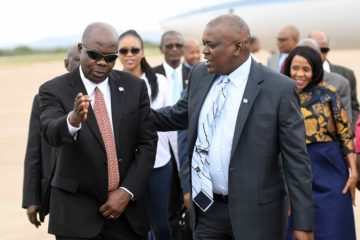