The people of Francistown will for the first time relish a meat festival.  Previously only heard of in places like Maun and Lobatse, the trio of Theofilius Moduwane, Wandida Fire, and Tumisang Moatlhodi decided to bless the second city with its very own festival.

The event will be held on the 1st of August 2015 at the Francistown Club where, to go along with the barbecued meat will be a soccer tournament, kid’s zone, food and drink quarter, and corporate and individual stalls. “We came up with this concept for the people of Francistown. Of course we have benchmarked the already existing meat festivals, and we want to make this a memorable and fun event. It is going to be an annual event so we need to take our time and give them an event they will look forward to coming back to next year, it is going to be impressive,” explained one of the organizers, Moduwane.

He also revealed that they host promotional events every Saturday at Café Sweeter than Sugar at Loja Mall in Francistown. Tickets for the meat festival will sell at P100 advance and P150 at the gate. The organizers have promised that for each ticket bought, P50 will be set aside for meat to avoid a situation where the meat is not enough for everyone and some patrons go without having some meat when they had bought tickets. “There will be different kinds of meat provided, as you know that, this is a meat festival,” concluded Moduwane.

Should banks issue mortgages without ‘down payment’? 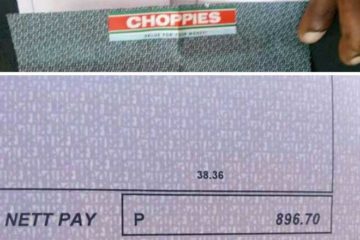