His name will certainly ring a bell. He is that seasoned speaker who confidently stands in front of an audience as an emcee. He is that guy on our TV screens presenting Sedibeng as well as the voice on RB 2, Cliff Kepaletswe is also an author of Fearless Public Speaking which was published in 2012 and a trainer at Speak Well training agency which transforms its students into world-class speakers.

“Even though I have a BA in Humanities with a major in English and minor in History from the University of Botswana, I always knew I was a creative person who wanted to pursue other things later in life. The urge to write my book came after I observed speakers go on stage and there was always something they would be doing wrong. Either their voice is low or their posture and dress code are not right. My book seeks to perfect all the challenges speakers face. I have had my own share of public speaking countless times and the many times I have been booked proved that I was doing something right hence the practical guide,” the Kgagodi native said.

Kepaletswe has experience with the media, being the founding presenter Btv’s first family-oriented talk show, Molemo wa kgang in 2006. Currently, he presents Sedibeng. He has also had a short stint with Duma FM as a talk and music show presenter. He is now the director of a Botswana Qualifications Authority (BQA) accredited agency that teaches business telephone etiquette, public speaking techniques, television presenting skills among others.

“I decided to come up with this kind of service because I saw a gap in the market. We are currently based at Windsor Inn. The reason we offer these kind of lessons is because we are not taught these skills at all the stages of our education. That is why most people struggle to stand in front of an audience and give a speech. So far, this service proves to be in demand as corporates are interested in giving their employees the training,” Kepaletswe said.

His book is available in all book stores in Gaborone as well as online on Amazon. On score of the fact that most Batswana are not keen on reading, Kepaletswe is planning to make the audio version of the book. He also plans to write self-help books after the release of the audio book. 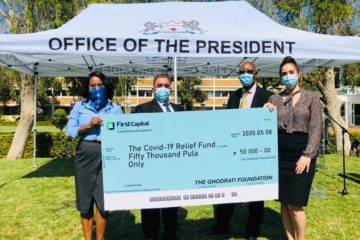