It was a heated debate at Lobatse High Court last Thursday as lawyers argued in length over the current position of the Judiciary  regarding the death penalty. In the case ,three men from Ntlhantlhe village have been convicted of murder after one of them invited them to kill his father.

The case was scheduled for arguments on extenuating circumstances on Thursday to try and discover  if there were any  mitigating factors that would urge the Court not to impose the maximum sentence of death . Defence lawyers, Moses Kadye, Shame Taimu and Dumezweli Mthimkhulu argued that the Provisions of Section 203 of the Penal Code which prescribes death sentence was unconstitutional.
Lawyer Kadye told the Court that the recent judgment by Judge Justice Tshepho Motswagole in the case between Rodney Masoko vs the State last month was persuasive.

“We should be persuaded to follow it because it was made by the same Court and the Court of Appeal has not yet made a ruling on it. The provision must be struck down for unconstitutional,” argued Kadye, and Judge Leburu was quick to announce that but he was not bound, referring to Judge Motswagole’s verdict.

“The Judge should distance himself from this provision. This is also all to do with belief in capital punishment. Some Judges hide behind the law and condemn people to death,” Kadye further argued.
He said courts should consider that human beings live by errors, and that there was a possibility that there could be an error in the present case. “But if a life has been taken and it later turns out that there was an error in coming to that decision, it is irreversible; there is nothing we could do,” he argued.

In his argument State prosecutor, Rahiman Khan said, “the death penalty is still practiced as far as Botswana law is concerned. The recent judgment by Motswagole is not binding to this Court. This Court is bound to exercise basing on extenuating circumstances on this case. ”

Khan also argued that there were aggravating factors contrary to the extenuating factors as claimed by the defense. He said the convicts were involved in the offense for purposes of gain. He said there is evidence in Court that the deceased’s son, Agisanyang had hired the other two men to kill his father.

The defense team also advanced witchcraft as an extenuating circumstance. They said it was clear from the evidence led in Court that Agisanyang genuinely believed that his father was bewitching him. They said the father had bewitched Agisanyang’s mother who is now late and that he also wanted Agisanyang dead. The defence argued that, belief qualified despite the practice being outlawed. 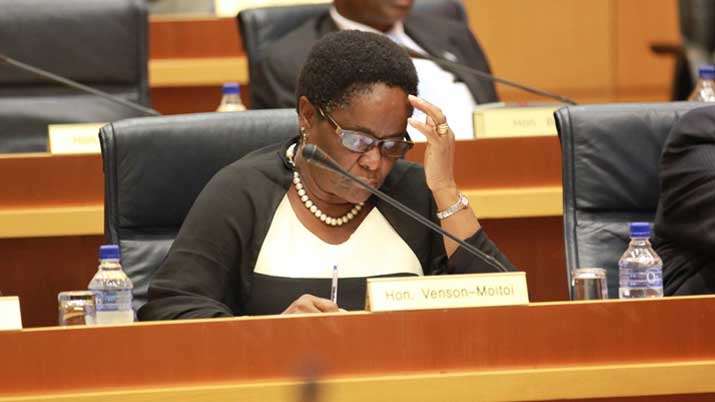